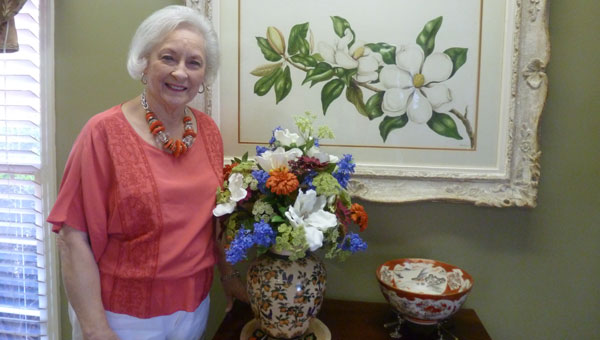 Ouida Mayfield has represented Ward 5 on the Columbiana City Council since 2000. (contributed)

The longest serving member of the Columbiana City Council is Mayor Pro Temp Ouida Mayfield. Mayfield retired in 1997 from 40 years as an educator in the Shelby County school system, the last 17 as principal of Columbiana Middle School. After her retirement, Mayfield turned her interest to her community and won her first election to the council in 2000 and has been reelected every term since.

Mayfield is also active in civic and church activities. A federated clubwoman for over 50 years, Mayfield is past president of both Novella and Columbiana Culture Clubs as well as winner of both the Louise Wilson Outstanding Clubwoman and GFWC Jennie Awards, the two highest awards for GFWC Alabama. Mayfield is a leader in Community Bible Study, past graduate of Leadership Shelby County, past chairman of many Columbiana Christmas Parades and Tour of Homes as well as serves on many boards. She is extremely active in her church Columbiana United Methodist Church.

This incredible busy and knowledgeable woman brings her wealth of experience to the council.

“For 13 years I have been pleased to serve on the city council,” said Mayfield. “So much is going on in Columbiana. We have Music on Main on Friday nights, two museums, Christmas Tour of Homes, Christmas Parade, Cowboy Day, Trade Days, Farmers Markets and Liberty Day. When we emphasize the positive in town, it makes other people want to know and be a part of Columbiana.”

Mayfield emphasizes the great headway that the city has experienced with the downtown revitalization project, improved sewer system, new sidewalks, new vehicles for the police department, new trucks in street and sanitation department and improved communication with the new Columbiana newspaper, Columbiana Bugler. She is encouraged with new businesses that have recently opened in Columbiana and urges the community to support local businesses.

“We do not want to cut back on services,” said Mayfield. “We want to increase them. Support for businesses though sales taxes brings revenue to our city. I want people to feel that they own a part of Columbiana. There is an enthusiasm of fresh ideas on the council and in town, a desire to accomplish and move forward with projects like the Summer Classics land. I am pleased to serve and be a working part of Columbiana.”