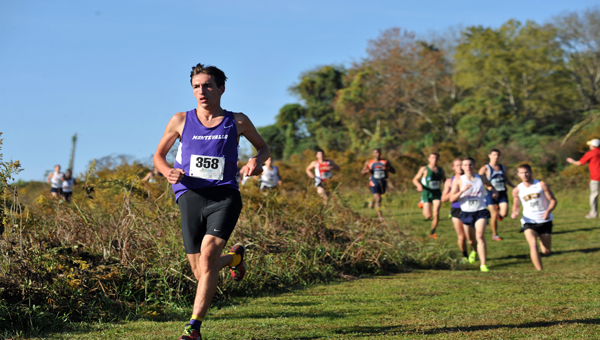 Montevallo Cross Country rising senior David Smith leads the pack in a 2012 race. Both the men’s and women’s teams open their season Sept. 7.

MONTEVALLO – The University of Montevallo men’s and women’s cross country teams will compete against some of the top teams in the nation on challenging courses across the Southeast during the 2013 season.

The Falcons will participate in four regular-season races during the 2013 season, including the second annual Falcons Classic on their home course on the University of Montevallo campus.

Montevallo will open the season Saturday, Sept. 7 in Americus, Ga. at the fourth annual Remembrance Run, hosted by fellow Peach Belt Conference member Georgia Southwestern. The Falcons competed in the inaugural Remembrance Run during the 2010 season.

The Falcons will close out the regular season Saturday, Oct. 12 by hosting the second annual Falcon Classic on their home course.

Montevallo will travel to Americus, Ga. to participate in the 2013 Peach Belt Conference Championship onSaturday, Oct. 26. The conference championship races will be hosted by Georgia Southwestern.

Vincent 12U headed to World Series