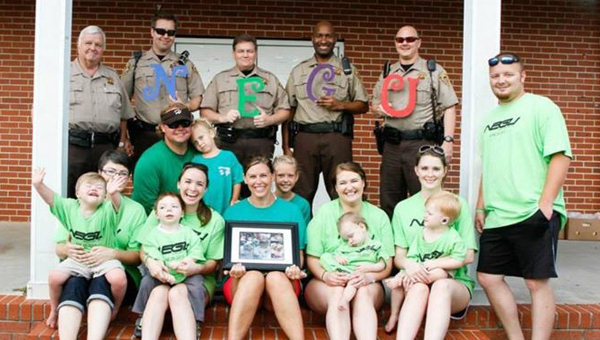 Pictured in front of Shelby County Sheriff’s personnel are the honorees and fighters recognized at the Shelby County NEGU June 29. (Contributed)

COLUMBIANA — The point of a 5K is to maintain a steady enough pace, combining speed and endurance over a long period of time to outrun competitors. Not only is it a race against the athletic ability of others in the field, it is a test against one’s mental fortitude and weaknesses.

In short, 5K races reward those who never give up.

Which is also what Jane McDaniel was hoping to do with the second annual Never Give Up 5K, held before Liberty Day festivities June 27: Reward those who approach life and adversity with a fighter’s mindset.

The first was held in November 2012 and was dedicated to helping Chris Goodwin, a former Shelby County High School student who lost a leg as a result of a car accident in February 2012. The event saw 44 runners raise more than $2,000 for Goodwin and his family.

The 2013 edition saw 175 registered runners take the starting line to raise money for five children in need, including Chelsea’s Tripp Nichols, a 1-year-old who suffers from seizures as well as blindness, and Calera’s Cayden Atchison, a 3-year-old with cerebral palsy.

The race took place in Columbiana, and raised more than $4,000 total.

“Saturday couldn’t have given us a better turnout,” said McDaniel in an email. “Other than the hectic nature of planning a race that I had no idea would be such a large event.”

McDaniel said she appreciated people’s high praise for the event, but wanted to deflect the attention from herself.

“A lot of people throughout Facebook and Twitter have been calling me a hero, but I’m no hero,” she said. “This is all God’s doing and He is the only one who should receive credit for that.”

McDaniel said she wanted to thank all of the event sponsors, the city of Columbiana, the Shelby County Sheriff’s Office, all of the participants and volunteers.

She said there would be another fundraiser event at the Steak n’ Shake in Alabaster July 23.

For more information on how to get involved with the Columbiana NEGU, visit the event Facebook page at www.facebook.com/ShelbyCountyNeguRace.