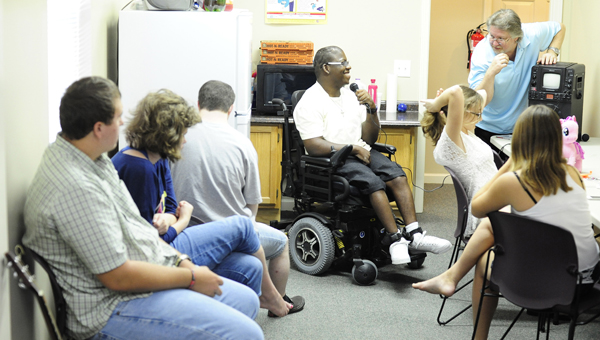 PELHAM – Only after working at United Cerebral Palsy for more than 20 years and becoming the Director of Adult Services did Wendy Betsch realize she was getting further and further away from the thing she loved most – hands-on service.

By the time Betsch retired, she was serving more than 300 people with disabilities at UCP, but her position as a director allowed her neither the time nor the opportunity to interact with those whom she was serving in a meaningful way.

“They wanted a director,” Betsch said. “I wanted to be out there loving on people.”

So she left. After retiring and spending several months deep in thought, she decided to continue serving those with disabilities in her own way, by opening her own business and serving a small group of people often left out of other special needs programs.

Chara, the Greek word for joy, is the name of Betsch’s new business that serves adults with cognitive or physical disabilities ages 20 and up. Chara opened in November, and Betsch said her goal is to reach people who are no longer in high school and therefore have little access to day programs.

“The need is unbelievable for this population,” Betsch said. “For the person who graduates or exits high school at 21 with a cognitive or physical disability, there’s nothing. There’s nothing like this in Shelby County.”

Chara runs Monday though Friday, 6:30 a.m. to 6 p.m. and offers structured days with programs focused on three main areas – life skills, leisure and social, and health and safety, with occasional field trips focusing on community integration. A typical day might include a lesson on using technology, cooking and crafts.

“Our goal was to provide a safe place for parents to bring their kids and give parents some relief,” Betsch said. “We also wanted to offer life skills training that might benefit the parent in the long run.”

Kenny Davis, a former Homewood High School student and participant in Chara’s regular day program, said his parents both have full-time jobs. Someone used to come to his house to take care of him when his parents were at work, but now he has something to do, he said.

“They (Wendy and the Chara staff) act like a family,” Davis said. “I like the computers and the Wii, and I like being around other people.”

Chara is privately funded and offers hourly, daily and weekly rates. All levels of disabilities are accepted, even those who are severely disabled or in need of personal care. Chara does not accept anyone with severe aggressive behavior.

FROM STAFF REPORTS University of Montevallo freshman Juan Noce made the biggest shot of his life on the biggest stage he’s ever... read more