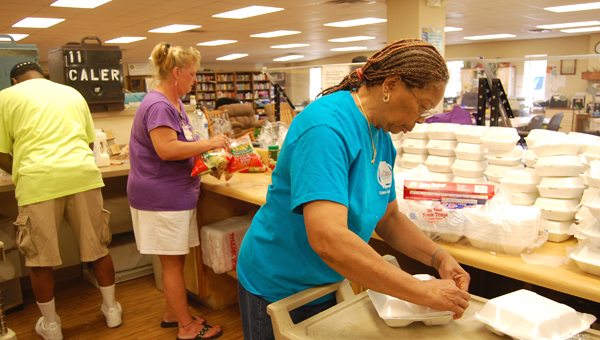 From left to right, Rickey Kidd, Tina Simons and Susie Simpson prepare spaghetti plates as a part of a fundraiser for the upcoming senior prom in Calera. The prom will be Aug. 17 and is free for all senior citizens to attend. (Reporter Photo/Stephanie Brumfield)

CALERA – Calera Senior Center Coordinator Tina Simons has always dreamed of hosting a senior prom, and last year she finally got the opportunity. This year, she wants to make it bigger and better than ever before.

This year’s senior prom will be Saturday, Aug. 17 from 5-8:30 p.m. at Calera First United Methodist Church. The event is free and open to all senior citizens living in Shelby County.

The Hollywood-themed prom will include a sit-down dinner, dancing, the crowning of prom kings and queens and door prizes ranging from a hair cut to a night out at the comedy club.

One of the biggest differences between last year’s and this year’s senior prom is the number of sponsors, said Mara Tierce, an employee of SouthernCare Hospice who has helped coordinate the event. Tierce said the extra sponsors greatly increased the prom’s budget and allowed them to do more, like hiring local companies to decorate and provide dance music.

The Calera Senior Center has also spent the last year fundraising. On Friday, July 19, they served spaghetti for $6 per plate, and they raised approximately $400 in pre-orders. They also raised money through yard sales, bake sales and a car wash throughout the year.

Rickey Kidd, a resident of Columbiana who went to last year’s senior prom, said he thought the event was created for seniors to have somewhere to go and people to fellowship with.

“It’s a big setting with a nice atmosphere and nice dinner,” Kidd said. “My favorite part was the fellowship, dressing up, dancing and having a really good time.”

“Especially in their generation, a lot of people had to quit school and go to work,” Simons said. “This gives them a night to dress up and have a night to themselves.”

Bo Robertson, manager of the Calera Senior Center and Simons’s sister, said the event is a blessing.

“We’re very passionate about it,” Robertson said. “Shelby County has wonderful seniors with wonderful hearts. They take care of us as much as we take care of them.”