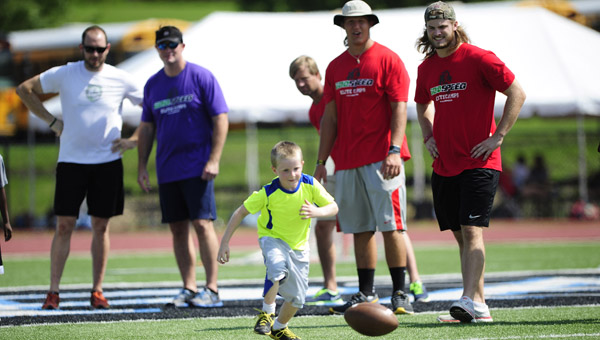 The camp, which was put on by Godspeed Ministries and RPM Elite Sports Academy of Hoover, brought eight current NFL players, and more than 20 former or current college football players to work with the more than 40 campers that attended.

In addition to the on-field training, event coordinator Lance Rhodes said the focus of the camp was to train players not just on football, but on life.

“One of the classroom sessions (was) built around growth and character,” he said. “Anything from discipline (to) financial for the older kids. They also (have) a class built around sharing the Gospel.”

Rhodes said the camp combined the ministry’s approach to bettering the body along with Webb’s personal beliefs.

“The verse that we use that’s kind of our core value is I Timothy 4:8,” he said. “(It) says that physical training is of importance, but Godliness is of importance of the utmost way. Joe’s verse is Philippians 4:13, ‘I can do all things through Christ who strengthens me.”

Rhodes said due to the AHSAA’s All-Star week, several older players were unable to attend, but the camp still gathered a strong crowd.

Webb, a former UAB quarterback and current Minnesota Viking, said he wanted to give young players an opportunity to fine tune skills.

“It’s always been about giving back,” he said. “I didn’t have this opportunity as a kid, to have NFL guys come to talk about what it takes to get to the next level. We want to talk to them not only about being a good football player, but having great character and being a good person.”

Webb also said he felt a great deal of success both on the field and in life came from within a player.

“(The pro players) talk about the adversity they had go through,” he said. “(The kids) have to understand adversity. We talk to them about making the right decisions. This is the most important part of their life, when they’re in their youth. You make good decisions then, you put yourself in a good position in the future.”

Mitchell Jones, 15, from Oak Mountain High, said he could tell the camp was helping him improve his game.

“I was working out at RPM, and they were telling me about it,” he said. “It seemed like a cool camp. You get to learn from them on the field, and see how they did it off the field, what they had to go through.”

“I think it’s really cool, because they get to teach you things that later in life, you’ll be prepared for,” he said. “I just want to work on my catching. I think it’s really fun, to teach us about passion, and to tell about some of the Bible verses.”

Vincent 12U at World Series

The Vincent 12U All-Stars are currently working their way through the 2013 Dizzy Dean World Series in Southhaven, Miss.Coached by... read more