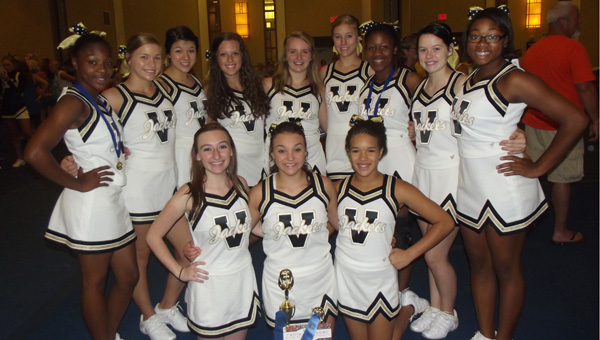 The Vincent High School varsity cheerleaders returned to town July 17 evening with quite a lot more hardware than they left with July 14 as they headed to the Universal Cheer Association camp in Gatlinburg, Tenn.

The squad competed in the camp champ competition the final day in the cheer and X-treme routine divisions. The squad placed fourth in cheer and second in X-treme. In addition, they earned blue superior ribbons for both the cheer and X-treme evaluations, earning them distinction as a superior squad, which comes with an invitation to perform at halftime of the 2014 Capital One Bowl in Orlando, Fla.

Along with the team honors, captain T’Kera Middleton, a junior, and sophomore Jasmine Banks were named UCA All-Americans and were invited to perform at the 2014 New Year’s Day Parade in London.

The squad is coached by Jennifer Supri and Brooke Gifford.