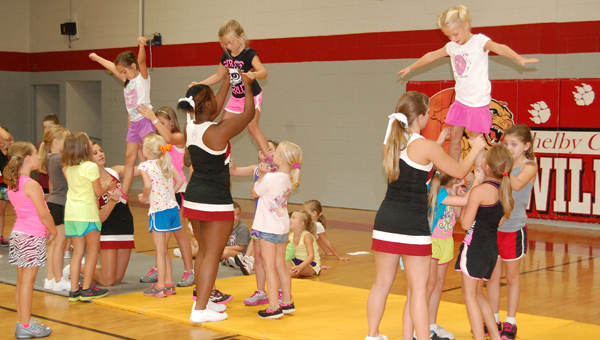 With about 50 participants paying $30 each to participate in the camp, the camp raised approximately $1,500 for the cheerleaders, who will use the money to offset the cost of their spirit packs, said varsity cheerleading coach Courtney Madison.

Everything the girls need throughout the year is included in the spirit pack, including megaphones, shoes, pom-poms and camp fees.

Shelby County High School senior and cheerleader Anna Morgan Couch said the summer cheer camp is the squad’s only fundraiser besides selling advertisements during football season, and between the two fundraisers the cheerleaders usually raise enough money to cover the entire cost of their packs. If the cheerleaders were to pay out of pocket, Couch said the packs would probably cost about $900 each.

Marisol Walker, the junior varsity cheerleading coach, also said the camp helps local teachers by giving them time to work in their classrooms.

“A lot of (campers) are school teachers’ kids,” Walker said. The teachers will often drop their kids off at the camp and then use the three days to get work done for the upcoming school year, she said.

“We don’t do a lot of PR. These parents know each year they’re going to send their kids back,” she said.

“I like the community aspect,” Couch said. “It’s a small town, and you see these girls at football games and see them trying to mimic what we teach them in camp. It’s fun.”

In other news, the Shelby County High School cheerleaders went to their own cheerleading camp at UAB in June, and they brought home several trophies.

By DEANNA SMITH / Guest Columnist Congratulations to the City of Montevallo for its recent inclusion of the downtown core... read more