Calera to receive $8 million from ATRIP to expand U.S. 31 bridge 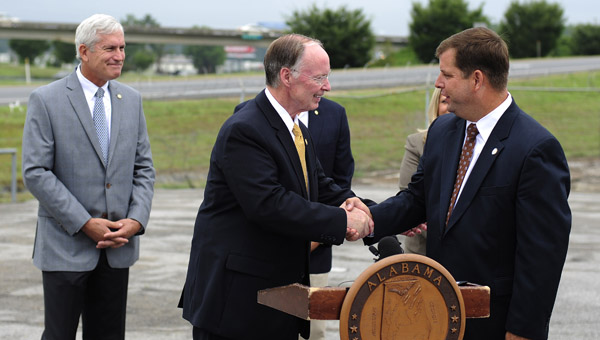 Gov. Robert Bentley shakes the hand of Calera Mayor Jon Graham at a press conference July 24. At the conference, Bentley announced the city of Calera would receive $8 million to expand the U.S. 31 bridge over I-65 in Calera. (Reporter Photo/Jon Goering)

CALERA – Gov. Robert Bentley announced the city of Calera would receive $8 million from the Alabama Transportation Rehabilitation and Improvement Program to fund the expansion of the U.S. 31 bridge over I-65 at exit 231.

The bridge will be expanded from two lanes to six lanes and is one of many projects that will receive funding from ATRIP in Shelby County, Bentley said during a July 24 visit to Calera. As part of this third and final round of ATRIP funding allocations, Shelby County will receive $23.9 million for road improvement projects.

Calera Mayor Jon Graham said he hopes the project will begin within 18 months.

“It’s been a long time coming,” Graham said. “We’ve tried many different avenues for many different years … It’s my pleasure to meet this morning and get such good news.”

The total estimated cost of the U.S. 31 bridge project is $10 million, with $8 million coming from ATRIP and the remaining $2 million funded by the city of Calera.

Graham said part of the $2 million will be funded by the one-cent sales tax increase the city of Calera passed in June.

During the press conference, which was held at Burton Campers in Calera, Bentley said the two biggest issues he sees in counties across the state are jobs and roads. ATRIP addresses both of these issues, he said.

“In a growing area like Calera, (this bridge) is too narrow to handle rush-hour traffic,” Bentley said. “It’s not a traffic issue – it’s a public safety issue and an economic development issue … I believe we’ll be able to recruit more businesses (with the expansion) … and create jobs with the companies who do these projects.”

Graham also said the impact of the expansion will be huge.

“It will have a tremendous economic development impact,” Graham said. “It should allow retail businesses to relocate to this area, and it will lessen the response time for emergency personnel. The sooner (the project can begin), the better.”

The expansion of the bridge is still in the early stages of design. Graham said the project would probably be included in the fiscal year 2015 budget.