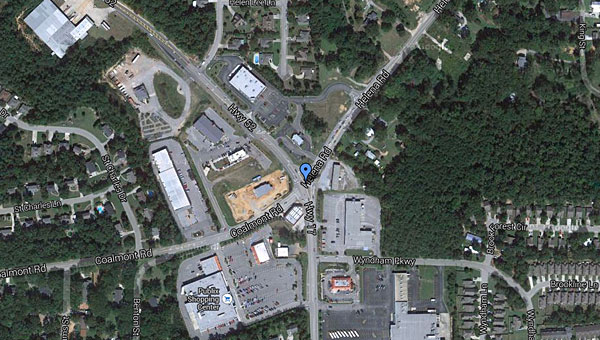 Helena is planning to move forward with improvements to the Shelby County 261-Shelby County 17 intersection after the city received ATRIP grant money from the state on July 24. (Contributed)

A source of frustration for many Helena drivers may become a little easier to navigate after the state approved funding for an intersection improvement project on July 24.

During his visit to Calera, Alabama Gov. Robert Bentley announced the third and final round of funding for the Alabama Transportation Rehabilitation and Improvement Program. Included on the list was funding for improvements to Helena’s Shelby County 261-Shelby County 17 intersection near Zaxby’s and the Publix shopping center.

“It was small in scope compared to some of the other ones on the (ATRIP) list, but it is very important to us,” said Helena Mayor Mark Hall. “That is exciting news.”

Hall said the city is planning to use the grant to add a dedicated left turn lane on Shelby County 261 to allow drivers traveling west to turn onto Shelby County 17 south.

“It really backs up on 261 during the evening rush hour, and this should really help with that,” Hall said.

Hall said the city is ready to approve engineering on the intersection improvements, and will budget the matching funds for the upcoming budget year.

“We are trying to address these smaller projects as we can to bring folks some relief,” Hall said.

Next year, the city is planning to seek grant money to add a turn lane on Shelby County 261 leading to Helena Elementary School, Hall said.