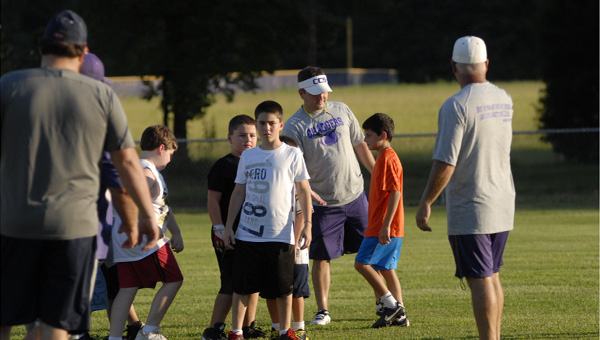 Members of the Cornerstone Christian coaching staff work with young players during a youth football camp on July 25.

Cornerstone Christian School held a football camp July 25 in conjunction with the Columbiana Youth Football League to help young players understand the fundamentals of the game.

The event saw those in attendance work with members of the CCS coaching staff as well as current and former Chargers. Head coach Tim Smith said the camp was different from most summer programs in that the emphasis was putting the “fun” in fundamentals.

“We teach them how to take handoff, catch passes,” he said. “Then we go to defensive stuff, teach them to form tackle. (We) have a good time with them, let them play around a little bit.”

He went on to say the purpose of the camp, in addition to teaching fundamentals, was trying to renew and maintain interest in the game.

While Smith said attendance was not what he had hoped, he said the more than a dozen players that did show up were from all parts of the county.

Nicholas Lamoureux, 10, from Hoover, is Smith’s nephew and said while he hoped to be a Hoover Buc one day, couldn’t pass up the chance to play on the field where he first watched football.

“I really like the Cornerstone Chargers,” he said. “I went to almost every game last year. I’m all about football, and I’m starting it next year.”

Lamoureux went on to say his favorite part of the camp was a combination of throwing, catching and having fun.

While Smith said he hoped the camp allowed the players to enjoy themselves, but also helped promote football in Columbiana.

“I’m a Shelby County grad, I’ve been here my whole life,” he said. “This is my town. We want to be as much a part of the community as we can be.”

BY DREW GRANTHUM / Sports Writer While the rain as of late has eliminated any sort of drought the state... read more