The two sides of Scott Owen 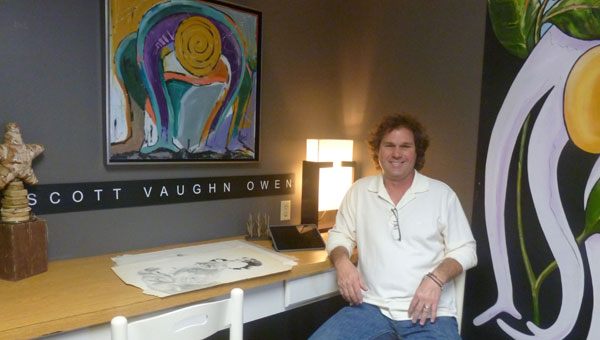 Scott Vaughn Owen sits among his art in his new studio OwenArts on Alabama 70 in Columbiana at his Sign Graphics location. (contributed)

Scott Vaughn Owen is a man with two distinct sides to himself – commercial designer and personal artist. His commercial side is well known throughout Shelby County through his successful graphic design business — Sign Graphics — located on Alabama 70 in Columbiana. His signs are everywhere: the new Shelby County Arts Council and Welcome to Columbiana, Home of Gov. Robert Bentley signs; Rux Carter; Brown Lumber; Busy Hands; entry signs into Forest Oaks, Wild Timber, Nottingham and much more.

However, Owen’s creativity is morphing into a more personal side as his love of drawing and painting has produced works of arts filling his new studio OwenArts in his business location.

Owen grew up in Columbiana, the middle son of Frank and Betty Owen. As a child Owen was always doodling with shapes and lettering demonstrating his innate ability to understand shapes and space. After graduating from Shelby County High School in 1980, Owen started his own business in 1983 when building was booming in Shelby County. He had more business than he knew what to do creating logos, brands, and signage all over the county.

Around 2008 the economy slowed and so did Sign Graphics. Owen’s wife Taylor suggested that her husband use his “pent up creativity” to paint and to enter the Juried Art Show at the Shelby County Arts Council. The first year he placed; the next year Owen won Best of Oils with his first oil painting ever!

“I was so encouraged that someone appreciated my art,” said Owen.

“Art is a creative process. What matters to me is the end result. My signs are technical; my art is abstract and very personal. I allow myself not to think about the end result, allowing things to evolve; it’s like looking around a corner that never ends, finding new things with each path taken by pencil, brush or chisel. This process is very different from my commercial instincts, where there is always a client to please. I hope everyone enjoys them as much as I did creating them.”