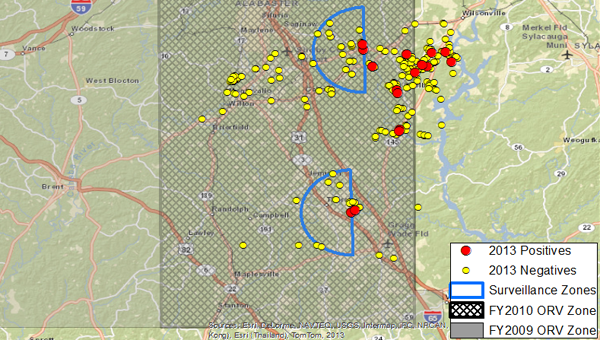 There have been 21 confirmed cases of rabies-infected animals in Shelby County and surrounding areas since January 28, with 15 coming from Columbiana. On July 31, officials from the United States Department of Agriculture, the Alabama Department of Public Health and local agencies gathered in Pelham to talk solutions.

Officials’ concerns are not with rabies exactly, but rather with where rabies has spread. Typically, raccoon-related rabies cases have been confined to the eastern portion of the United States with the Appalachians serving as the general boundary line, and in Alabama the Coosa River has served as the dividing line between areas with rabies and areas without. With rabies cases now being reported west of the Coosa River, officials are concerned the virus is spreading.

The most recent case of rabies in the area was reported July 24 near the Shelby/Jefferson County line on Alabama 119.

Of the 21 confirmed cases in the area since January, two were reported in Clanton, four in the Leeds/Moody area and the remaining 15 in Columbiana and surrounding areas, said Dana Johnson, who works with the Wildlife Services division of the USDA.

One domestic dog, one cat, one red fox and 18 raccoons tested positive for the virus, Johnson said.

The increase in local rabies cases is likely due to a rise in raccoon populations, Johnson said. Raccoons, the main carrier of rabies in the eastern U.S., probably multiplied and moved quietly through unpopulated areas, and now that they have reached more densely populated areas like Columbiana, cases are finally being reported, he said.

Johnson also noted that not all cases of rabies are reported, locally or nationally. Often locals, especially in rural areas, will take matters into their own hands and kill animals without reporting the incident, he said.

Not all animals with rabies are ferocious, nor do they necessarily show symptoms, he said. Raccoons are especially notorious for being silent carriers of the virus because of the virus’s long incubation period.

“The best surveillance is when we get calls about strange-acting animals,” said Frank Boyd, state director with USDA Wildlife Services.

Because rabies affects the nervous system, it often causes animals to do things they wouldn’t normally do, Boyd said. Examples of “strange-acting” animals include walking in circles, sitting on a porch for hours without moving, falling over while walking and other out of the ordinary behaviors.

Rabid animals also tend to salivate excessively and exhibit ferocious behavior, though these symptoms do not have to be present for an animal to be infected, Boyd said.

The biggest obstacles to preventing the spread of rabies in Alabama are relocation and unsatisfactory test results caused by faulty samples, said Dee Jones, state veterinarian for the Alabama Department of Public Health.

In February, for example, Jones received a phone call from a health office in Walker County in Northwest Alabama about rabid raccoons and possible human exposure in the area.

Jones’s first thought was, “Why are there rabid raccoons in Walker County?”

The answer? Someone had adopted three raccoons in Baldwin County, an area of Alabama known for rabies, and had brought the animals up I-65 to an area of the state where rabies is unheard of. One of the raccoons tested positive for rabies.

Because raccoons are so territorial, relocating them even several miles away might cause them to roam into new territory until they find their way back home, probably fighting other raccoons and animals along the way, Jones said. If the relocated animal were infected, it could spread the disease to other animals during its search, he said.

Jones also attributed human intervention as an obstacle to preventing and controlling rabies. When locals shoot animals in the head because they suspect the animal of having rabies, Jones said they prevent the animals from being tested, and testing helps officials determine whether the rabies virus is spreading to new locations.

If someone does decide to shoot an animal suspected of rabies, Jones said it would be better to shoot the animal in the lungs because the brain has to be in tact in order for the animal to be tested, he said.

“If we didn’t vaccinate our dogs, we wouldn’t be talking about raccoons,” Jones said.

“(Prevention) is the whole premise of why we vaccinate dogs and cats,” Jones said.

What To Do If You’re Exposed

In cases where an animal bites or scratches a human and cannot be caught for testing, or in cases where test results are unclear, officials are forced to be cautious and will recommend the person take a series of post-exposure rabies vaccinations, he said.

With only two companies in the United States that currently produce the vaccine, Jones said it’s important to conserve it for those people who really need it, making preventative measures like vaccinating animals, reporting bites and not relocating wild animals all the more important.

Anyone with concerns about possible animals with rabies or human rabies exposures should call the rabies hotline at 1-888-RABIES4 or 334-844-5670. For more information about rabies, visit Cdc.gov/rabies.