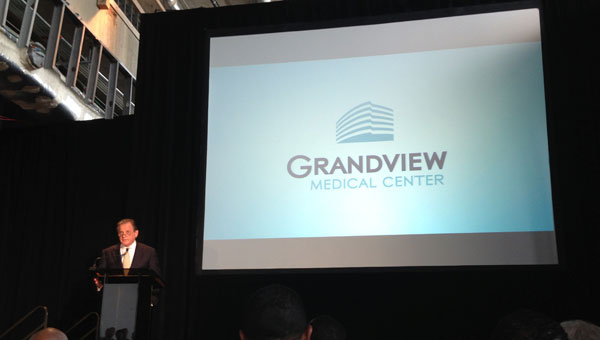 BIRMINGHAM — The former HealthSouth building on U.S. 280, recently purchased by Trinity Medical Center, will be known as Grandview Medical Center when it opens about two years from now.

Wayne Smith, CEO of Community Health Systems, which operates Trinity Medical Center, announced the name during a July 31 press conference at the hospital.

“We waited for a long, long, long, long time for this day. But we’re here,” Smith said. “The new hospital deserves a name that reflects the grandeur of this building and the beauty of the campus. It needs a name that captures the optimism and perspective of the world class teams that will deliver care here, and honors the progress and distinction they’ve achieved.”

Gov. Robert Bentley attended the press conference and addressed the crowd, saying the hospital’s progress is the culmination of years of hard work.

“Today, we’re here in Birmingham celebrating a new hospital — Grandview,” he said. “This is an outstanding hospital. We’ve got a long way to go in this state, but we need to dream big, and dream big like this hospital.”

Trinity Medical Center CEO Keith Granger said the “flagship hospital” could not have become a reality without staunch support from the community.

Trinity first applied for a certificate of need to relocate to the abandoned HealthSouth facility four and a half years ago. Legal challenges to the move ensued from Brookwood Medical Center and St. Vincent’s Hospital, and the court battles continued until May 2013, when the Alabama Supreme Court ruled against hearing further arguments against Trinity’s relocation.

“That flagship hospital, while it seems to have taken far longer than any of us would have liked, is going to become a reality,” Granger said.

Trinity will continue under its existing name for as long as it operates on the Montclair Road campus in Birmingham, while the U.S. 280 campus will immediately be known as Grandview.

Once construction on the hospital — expected to begin later this year — is underway, the $280 million project is expected to take 18-24 months to complete.