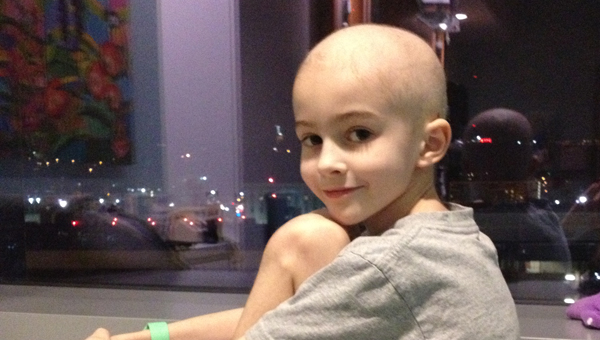 John Oliver Tetloff, 6, of Montevallo was diagnosed with neuroblastoma May 6. He spent July 4 at Children’s of Alabama hospital in Birmingham, where his window faced Vulcan and where he said he had a great view of the fireworks. (Contributed Photo)

MONTEVALLO – Today, you wouldn’t know 6-year-old John Oliver Tetloff has cancer. He’s jumping around his living room doing karate, smiling ear to ear, and as his mom Meredith says “being a goofball.”

Several weeks ago, John Oliver underwent his third and worst round of chemo yet, which left him extremely sick and extremely dehydrated. The fourth and last round wasn’t as bad, and he will receive his fifth round of chemo after he has surgery to remove a tumor near his kidney. The fifth round will be as severe as the third.

John Oliver arrived at the ER April 22 with pain in his knee and hip and ongoing fevers. After a series of scans, x-rays and biopsies, he was diagnosed with neuroblastoma on May 6.

Neuroblastoma is a neuroendocrine tumor that develops on nerve tissues throughout the body. According to Meredith Tetloff’s blog, Ollieupdates.org, John Oliver’s cancer is “stage IV, high risk,” with the primary tumor on his adrenal gland near his kidney.

He spent 25 days at Children’s of Alabama during his first round of tests and chemotherapy, while his classmates at Montevallo Elementary School wrapped up their last few weeks of kindergarten. 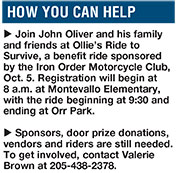 Very quickly, John Oliver talks about what it’s like to be bald, which he says he likes.

During his first 25 days at the hospital, John Oliver’s hair became matted after spending so much time in bed. One day, he told his mom, “I untangled the mat!”

She had her back turned at the time. Turning around, she said, “Oh, the mat literally came out!” His hair had started falling out in clumps.

Soon after, John Oliver and his dad shaved their heads together. Meredith Tetloff offered to shave hers, too, but John Oliver told her she would look weird, so she didn’t.

After John Oliver’s surgery and fifth round of chemo, Meredith Tetloff said John Oliver will receive an even stronger round of chemo, which will “destroy his immune system” and cause him to need to retake all of the vaccinations he received as a child.

After this last, highest dose of chemo, he will receive a stem cell transplant and immunotherapy to rebuild his immune system. Hopefully, his tumor, which has already grown much smaller, will be gone at that point, and he will have no new tumors, Meredith Tetloff said.

“With neuroblastoma there’s a high relapse rate, so we will have to keep an eye on it,” she said.

Because his white blood cell count is often so low, John Oliver is confined to his house most of the time, but he is never short of people thinking about him or showing him support.

His aunt bought him an Xbox with Xbox Live and a pair of headphones soon after he started chemo so he could play video games long-distance with his cousins.

The day he got home from his first 25 days in the hospital, he received a bulletin board-sized poster from his classmates at Montevallo Elementary. Everyone in the school had signed it.

“That made me feel like, wow,” he said. “How did they do that? It was everybody in the entire school. Just try to count that.”

When asked what he wanted to say to everyone who has sent him gifts and messages of support, all he could say was, “Thank you!” with arms stretched wide and an even wider smile on his face. “Thank you!”

Meanwhile, Meredith Tetloff, in between making sandwiches and playing with John Oliver when he feels up to it, has been able to continue her work as an assistant professor of social work at the University of Montevallo. She said she is grateful for supportive colleagues and a job that allows her to do much of her work at home.

She has also started blogging. Her blog, Ollieupdates.org, serves two purposes, she said. It gives her a place to sort through her emotions, and it serves the practical purpose of universally and simultaneously letting everyone know what’s going on.

“I never thought I’d be an advocate for a child with cancer, but the more I’ve learned about it, the more I hope to use our experience to educate other people,” she said.

One of the hardest parts has been trying to explain cancer to a 6-year-old, she said. Particularly helpful has been a Charlie Brown cartoon about cancer. John Oliver says it “feels like somebody who knows (him) created it.”

Initially, Meredith Tetloff also used her blog as a place for people to offer their services should the Tetloff family need help, but she’s since discovered there isn’t much others can do.

“I know people want to help, but I often feel at a loss for what they can do,” she said. “I have neighbors who take care of the small stuff. The things that are really difficult are the things people can’t help with. Just sending us messages so we don’t feel so alone and isolated has been really helpful. I’ve been really, really grateful for all of the support.”

John Oliver said he now appreciates something he used to hate – school.

“I hated school before I had cancer,” he said. “I’ve learned to appreciate school.“

FROM STAFF REPORTS  Locals looking for help with their Nooks, Kindles and other e-readers can take a stop at the... read more