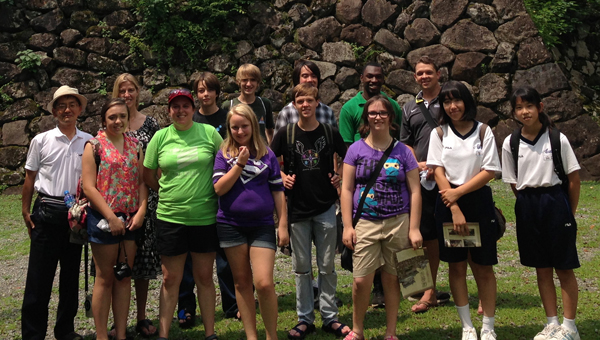 In addition to participating in home stays with Japanese host families, the students went white water rafting, visited a Buddhist temple, learned calligraphy and meditation, participated in a Japanese “Taiko” drum lesson, toured a pottery village, went to a Japanese paper village, hiked to a castle and more.

“It was an incredible experience, and the children got so much out of it,” Cost said. “I was really impressed with the students that they tried all of the different foods. They grew up a lot on the trip.”

Cost said the goal of the biennial trip, which began in 2009, is to immerse Montevallo students in Japanese culture and to give them an appreciation and understanding of the similarities and differences between Japanese and American culture. The students on this year’s trip ranged from age 12 to 16.

The eight students who went on the trip were selected after submitting an application and going through a series of interviews. They qualified based on being residents of Montevallo and showing commitment to a Japanese cultural exchange, Cost said.

The students paid for most of the cost of their trip, but they supplemented the price of plane tickets with fundraisers.

Before leaving, they each took about three months of Japanese lessons, though they had an interpreter with them every day of the trip.

Devin Cartwell, 16, said his favorite part was living with his host family, who actually spoke English.

“It was a really great experience that I wish other people could experience for themselves. It’s a really beautiful land, and the people there are really nice.”

The Walmart in Alabaster’s Propst Promenade shopping center will be partnering with Alabaster City Schools over the next week to... read more