Give me back my mouse 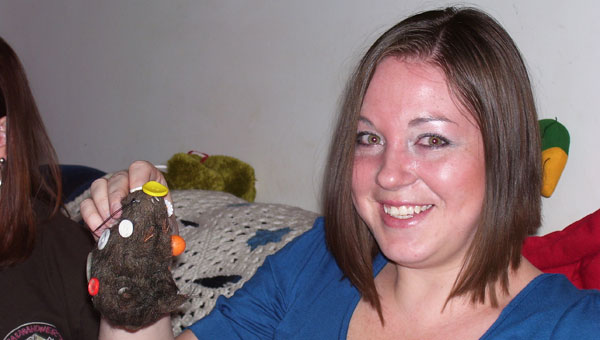 Christie Moore unwraps another joke from her grandfather, Ken Nivens, after he heard what she wanted for Christmas a few years back. (contributed)

My husband Ken won’t touch the computer. He takes literally words like mouse and web. To him, a “mouse pad” is where a mouse lives, a “hard drive” is a long road trip, a “cursor” is someone who curses.

One Christmas, when a granddaughter said, “I want a mouse with lots of buttons on it, he glued buttons on a cat’s stuffed mouse toy and wrapped it. It made for a lot of fun at family gift-opening on Christmas morning.

I recently read an e-story that said the end of the computer mouse is “nigh.”

Now, people are using multi-touch track pads for both laptops and PCs and touch screens on phones and other devices. I watched a toddler great-grandson touch my computer screen trying to change the channel.

The overall trend is clear,” said Wagstaff’s article, “the mouse is disappearing.”

But many of his 100-plus responders are ready to cry with me, “Give me back my mouse.”

“Please, please give me my desktop computer with my 24-inch screen and my wireless mouse,” said one.

One responder said he thinks it would be annoying to type and use the weird pointer-thing.

“I need a large laptop with mouse and a small mobile device as a backup,” said another. He likened this to “buying a bicycle or scooter to compliment the family automobile.”

“Anyone who tries to take my mouse away should be prepared to lose a finger or two,” one man wrote.

My agent said she uses a portable computer with a mouse when she goes to conferences because she finds touch pads frustrating.

Since my desktop crashed last fall, I’ve been trying to do sheets of text with photos on a laptop, using a multi-touch pad. I’m about ready to say with some Wagstaff’s readers, “I’ll give up my mouse when it’s pried from my cold, dead hands.”