MONTEVALLO – Ricardo Montano Gonzalez, 39, of Montevallo was charged and booked at the Shelby County Sheriff’s Office Aug. 2 on two counts of first degree rape and one count of first degree sodomy of a 13 year old. 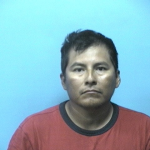 Littleton said the alleged crime occurred between Dec. 1, 2012 and May 31, 2013 at a residence located on Alabama 25 in Montevallo.

Gonzalez is being held in the Shelby County Jail on bonds totaling $180,000.

By NEAL WAGNER / City Editor A Pelham man is being held in the Shelby County Jail on bonds totaling... read more