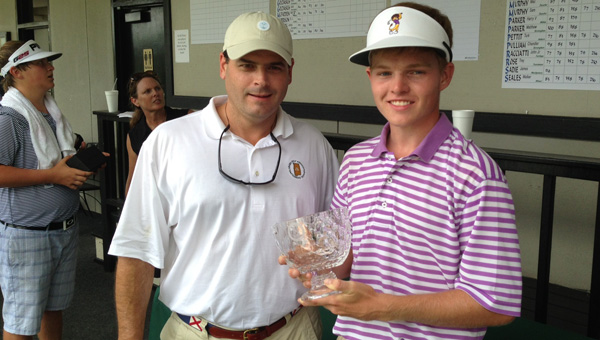 The Helena native and recent Pelham graduate posted an impressive 69 for the final round after shooting a 65 and 68 for the first two rounds. Slane won the tournament for golfers 18 and under by posting a staggering 14-under for the tournament.

Lawson said Slane’s achievement on an unfamiliar course is what stood out to him.

“The most impressive thing is it’s his first time playing on the course,” he said. “He’s played in tournaments all summer with the best players (from) all over the world.”

Not only does it put an end to his career as a junior golfer, it wraps up a strong season that saw him win six out of 11 AHSAA tournaments entered. He never finished outside of the top five in any of them.

Slane said he felt the win was the perfect way to end his junior career.

Slane also said the win was a continuation of a hot streak he’s been on.

“I’ve been making a lot of birdies this summer,” he said.

The course proved to be difficult for a majority of the field, but Slane said he felt no pressure because he was unfamiliar with the course. “Maybe it was an advantage,” he said. “Because I didn’t know where the trouble was. (It was) just my week.”

Now Slane will focus on the next level, which includes playing golf at the University of North Alabama next season. He said the win gives him momentum going into the next phase of his career.

“It definitely gives me confidence,” he said. “I’ve never won a big event before. To shoot 14-under and win by 13 strokes gives me a lot of confidence.”

Lawson said he had no doubt that Slane would do just as well at the next level.

“What he’s doing is impressive,” Lawson said. “He’s only going to get better.”