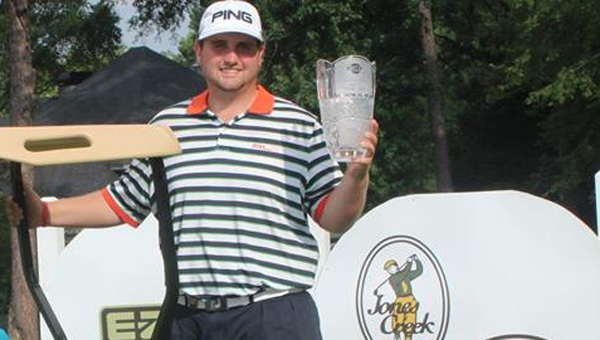 Spain Park golfer Connor Smith knows a thing or two about going back-to-back in golf tournaments. When he captured the E-Z-Go Vaughn Taylor Championship presented by TaylorMade-Adidas Golf, it marked the second win at an American Junior Golf Association event this year.

It was also his second straight win in the event, capturing last year’s tournament as well. In a strange twist, he also captured the event previous to that as well. In all, it was Smith’s fourth AJGA win.

The 2013 Vaughn Taylor Championship, held at the Jones Creek Golf Club in Augusta, Ga., featured 84 golfers from 12 states and three countries. In the Boys Division alone there were 63 golfers.

Smith never trailed in the championship, and posted an impressive 14-under for the tournament.

His 202 for the tournament beat the previous event record of 205 held by University of Alabama golfer Bobby Wyatt.

“My goal was to beat what I shot last year,” he said.

Smith said he made a concerted effort to improve his short game.

“I had some putting troubles,” he said. “I got my dad to help me, and we came up with ‘Perfect Putting Practice.’ You go around the hole and have to hit the center of the cup for a point.”

Smith said the game, by teaching him to hit the middle of the hole from all area of the green, helped him become a better putter.

While Smith still has his senior year left, he has already started entering a number of amateur events to prepare him for collegiate golf at Middle Tennessee State University. He plans to enter a Web.com Tour event in Knoville Aug. 15.

He said days like the ones he had at the AJGA tournament can only help him going forward.

“I shot 8-under (the first day) and started with a bogey on the first hole,” he said. “I didn’t have spectacular shots, just one of those days where everything hits.”