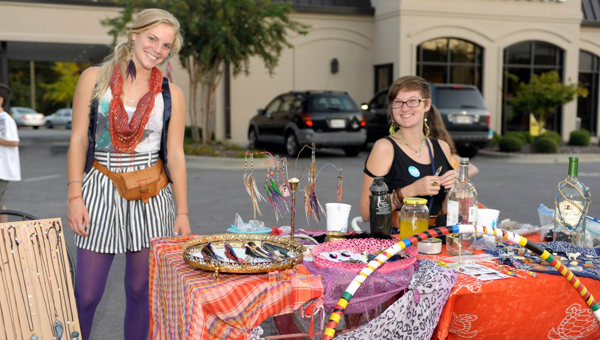 MONTEVALLO – To celebrate the start of school in true Falcon fashion, the University of Montevallo and the Montevallo Industrial Board are joining forces for the seventh time to present the second annual “Put a Bird On It” art walk, a bird-inspired art and business showcase inspired by the UM falcon logo.

Art Walk will be held Aug. 24 from 5-8 p.m. in downtown Montevallo, and artists can sign up to show and sell their handiwork at booths until Aug. 19. Booths are $10 for student artists and $20 for non-students.

Tiffany Bunt, coordinator of the tri-annual event, said artists are encouraged to bring anything that celebrates birds, though they are certainly not limited to avian-inspired pieces.

Of the about 50 artists and businesses that have signed up so far, Bunt said pieces range from birdhouses and up-cycled, repurposed art to jewelry, hand-made scarves, photography, woodwork, stained glass and more. There will also be food vendors.

“I like to describe it as eclectic art,” Bunt said.

New this year is a field day event hosted by the Montevallo Junior City Council, which will be held between Main Street and Orr Park beginning at 4 p.m., Bunt said.

Activities will include carnival games, tug-of-war, water gun wars, capture the flag, a moon bounce and more, and all proceeds will go to funding uniforms and equipment for the Montevallo Middle School band and athletic teams, according to a press release.

Live music will also fill the streets of Montevallo during Art Walk, with musical guests including Blaine Duncan and the Lookers, Shaheed and DJ Supreme, Two Jimmy Band and Chase Stewart.

Following Art Walk, the city will present Movie in the Park “Oz: The Great & Powerful” at 8 p.m., according to the press release.

FROM STAFF REPORTS Thompson High School will give the community a colorful way to kick off the school year on... read more