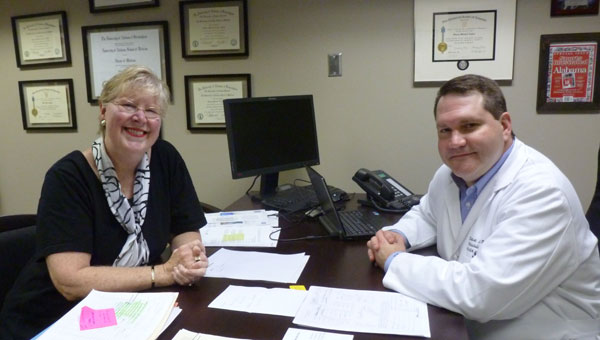 “If God brings you to it, He will bring you through it, whatever it is.” My recent surgery at Shelby Baptist proved this slogan to me.

In 2009, I learned I had an aneurysm to my right kidney that was found unexpectantly by CAT scan. Last spring gastroenterologist Dr. Robert Marks after reviewing a CAT scan thought that the aneurysm needed to be double checked, a decision that probably saved my life for rupture could have been fatal.

Marks sent me to Health South cardiologist Dr. Neeraj Mehta, who looked at all my films of the aneurysm personally and decided to send me to vascular surgeon Dr. Steve Taylor.

Taylor scheduled an arteriogram to repair the aneurysm easily with a stent. The stent did not work but gave Taylor valuable information to repair the tricky aneurysm with “big” open surgery.

I spent a week at Shelby Baptist after Taylor’s successful but difficult surgery. The quality of care from the nurses and staff were exceptional. I now have a huge zipper down my chest and abdomen that is still zipped and my balloon is gone.

Taylor was well-trained at UAB, the first vascular surgeon Fellow working under Dr. William D. Jordon, chief of vascular surgery. Taylor was one of the busiest surgeons at UAB performing more than 700 operations a year for close to 10 years. In June 2012, Taylor came to Shelby as its first vascular surgeon, a specialized field that encompasses both the technical side and open surgery, to have multiple tools is the surgeon’s tool box uniquely trained for both.

Shelby County is blessed to have Shelby Baptist Medical Center and excellent, caring doctors as Marks, Mehta, and Taylor. So am I.

Red Robinson with Honey and Stubbs Robinson, adopted from the Shelby Humane Society, at their home on Lay Lake. (contributed)... read more