April Taylor has a passion for cross-stitch 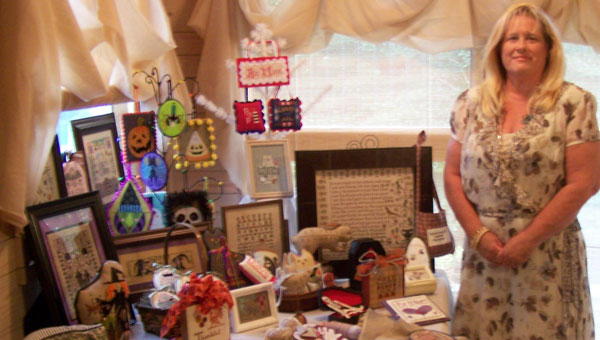 April Taylor exhibits a few of her many cross stitch creations. She stitches everything from cutie designs to family history to reproduction antique samplers. (contributed)

“Cross Stitch has come a long way in development from making X’s on cloth in the eighties when stamped cross stitch was all the rage,” April Taylor said.

Yet, according to April, it is a declining needle art, which she would love to revive so it will not die out.

The cross stitch she does now is called “counted” cross stitch, she said. “I use linen fabric in different counts and colors.

“You have a chart that you have to count the symbols to work on the fabric to get your design. You can get charts of paintings, landmarks, samplers, animals and floral designs. The designers today are like artists. They have their own style.”

April worked 14 years for Hoffman Media in Birmingham, stitching models for designers, which were then photographed and used in needlework magazines the company published.

She now does model stitching for designers Brenda Gervais of Country Stitches/With Thy Needle and Thread designs and for Donna Bayliss of By the Bay Needle Arts. She is also Stitching for Michelle May of The Raspberry Rabbits. “Felt Fashion is a new concept she designed,” April said, and she’s model stitching for a new book May has coming out.

April said she enjoys putting history in her needlework. She’s created memorial samplers; family mementoes which include things like old buttons; a chart with twelve pictures representing important family events like her marriage to Dewayne Taylor and the births of their daughter Raeanne Pruitt and grandchildren Joshua and Zoe.

See more of April’s work on facebook or her blog Aprilmechellesdulllife@blogspot.com.

Give me back my mouse

Christie Moore unwraps another joke from her grandfather, Ken Nivens, after he heard what she wanted for Christmas a few... read more