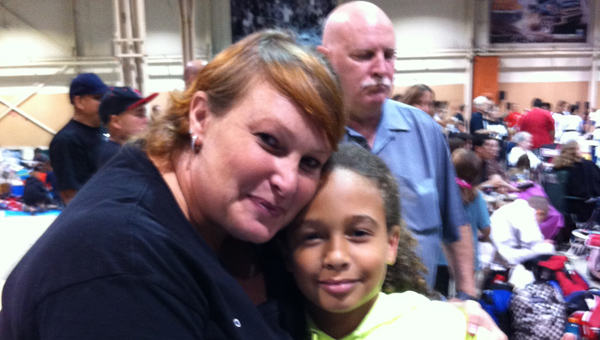 Alabaster’s Jojuan Horsley was the only participant from the state of Alabama participating in taekwondo at the 2013 State Games of America in Hershey, Penn., July 31-Aug. 3. He captured gold in the only event he entered, for taekwondo form. He is pictured here with his mother, Jo. (Contributed)

ALABASTER — The opportunity to represent one’s state in a national competition is a rare honor, usually reserved for the best in a given sport. To be one of many putting forward a collective effort in a sport to bring home a gold medal or other accolade provides a sense of accomplishment not matched by many other sporting endeavors.

Unless, of course, you are the only person representing the state in your given sport, and you just happen to take a gold medal.

Such was the case with Alabaster’s Jojuan Horsley, as he was the only participant from the state of Alabama participating in taekwondo at the 2013 State Games of America in Hershey, Penn., July 31-Aug. 3. He captured gold in the only event he entered, for taekwondo form.

Horsley, a 9–year-old at Meadowview Elementary, made the 825-mile trip by car with his family, after being asked to represent the state by Sen. Cam Ward, R-Alabaster.

“We took one of our granddaughters with us,” said Horsley’s grandmother, Susan Crotzer. “It was the most incredible drive.”

The form event, which took place Aug. 3, consisted of two or three precision movements that can be made to protect one’s self executed to perfection. Instead of numerical scoring, judges gave hand signals to indicate how well a performer did. In this case, if a judge pointed straight ahead, it was the same as getting a 10 in another form.

Horsley said being the lone Alabamian in the competition was tough, but worth it.

“It was really fun,” he said. “Being the only one (from Alabama) made me nervous, (but) the opening ceremony was really cool. It means a lot winning gold in my first nationals.”

His grandmother was quick to praise his hard work, as well as his teachers at Impact Martial Arts in Pelham.

“I’ve watched him go from a white belt to a second degree black belt in four years,” she said. “My heart is overwhelmed. I’m so proud of the person he’s become.”

By DREW GRANTHUM / Sports Writer For most high school football teams in the county, the first game of the... read more