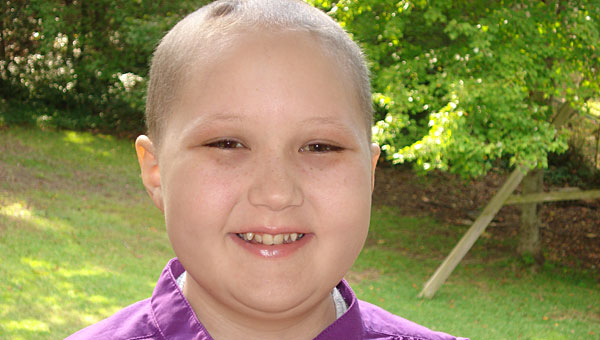 Despite battling for her life for the past four years, 11-year-old Alabaster resident Emily Skelding hasn’t taken her mind off helping others whenever she can.

After hearing a pastor in New York discuss his plans to help feed hungry children, Skelding quickly wrote and illustrated a book titled “Picnic Pals” to raise money for the pastor’s organization “Child Cry,” which helps feed hungry children across the globe.

“One hundred percent of the sales of Emily’s book goes to his organization called Child Cry,” said Chrissy Walsh, co-founder of the Nonni’s Hope nonprofit organization, which is supporting Skelding and her family. “Emily has an amazing vision herself, and also wants to use her cancer to benefit others. She recently had a book signing at Children’s (Hospital), where she receives treatment.”

“It is amazing to see the willingness of so many people in the giving of their time and resources,” Walsh added.

Walsh, along with local residents Heather Kraus, Heidi Bodin, Kristen Noles and Tonia Jones, founded Nonni’s Hope a few years ago, and currently are working to help Skelding and her family with the expenses and hardships related to her battle with leukemia.

Walsh and Kraus founded Nonni’s Hope in honor of Walsh’s mother, who was nicknamed “Nonni” by her grandchildren.

After Walsh’s mother passed away in 2012, the Nonni’s Hope founders decided to help others battling the disease.

“She loved the idea of Nonni’s Hope and using her suffering to help others. She even told her daughter Chrissy before dying, that if her cancer helped one person know Christ’s love and generosity then it was worth it to her to suffer through it,” Walsh said of her mother. “Our mission is to help ease some of the financial strain that cancer places when loved ones have to travel to help care for their loved ones.”

“Her family has been strained for quite some time now, but they let God use them through it all,” Walsh said. “They trust His plan, but are praying for a miracle.”

On Sept. 22, Nonni’s Hope will hold a blood and bone marrow drive at Westwood Baptist Church on Alabaster Boulevard from 12.30-5:30 p.m.

On Aug. 25 at 4:30 p.m., Bikram Birmingham in Vestavia also will be holding a Karma class to raise funds for Nonni’s Hope.

The organization is selling necklaces on its website at Nonnishope.org to benefit Skelding and other children battling leukemia.

By DREW GRANTHUM / Sports Writer PELHAM — The Hope Christian Eagles kick off their season Aug. 16 on the... read more