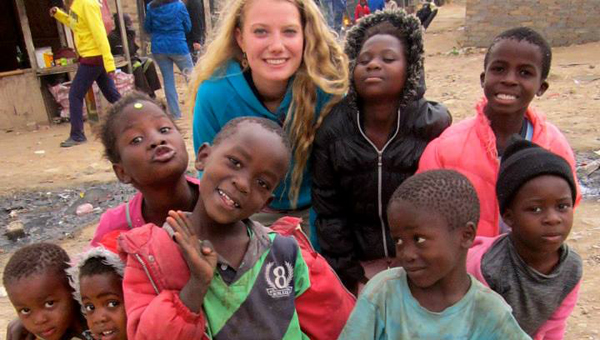 Cornerstone Christian senior Laurel Davis traveled to Zambia and South Africa for a mission trip this summer, where she taught a summer camp for kids and visited with refugees. (Contributed Photo)

17-year-old Laurel Davis spent almost seven weeks in Africa this summer, and unlike many teenagers who go on mission trips overseas, she paid for nearly the entire cost of the trip herself.

Davis, a senior at Cornerstone Christian, left the states June 15 and returned Aug. 1, spending about three weeks at an orphanage in Zambia and four weeks at a refugee camp in South Africa.

She raised $5,200 in a little less than two years, babysitting five days a week during the summer and working at her church’s nursery on Sundays.

Near the end, when the cost of plane tickets and other fees started mounting, she says she “gave in and wrote letters.” She received the rest of the cost of her trip, $800, in donations, with a large amount of support coming from her school.

While missions have always been on her heart, Davis said this particular trip was a perfect fit for her because it allowed her to follow her passions.

“I love kids, and I want to be a teacher. I would love to teach in other countries as a missionary,” she said.

In Zambia, Davis camped in tents with about 30 other missionaries at an orphanage called Camp Hope, which is part of the organization Every Orphan’s Hope.

Located in a fenced-in compound, Davis said the orphanage is unique in that it tries to recreate family units and doesn’t adopt out. Four boys and four girls are paired with a “Mama,” or a widow in the community, and they live together like a family.

Although Davis and her comrades stayed at the orphanage, she said the summer camp they hosted was intended for kids outside the orphanage and kids without support systems. About 150-200 kids attended the camp and ranged in age from 5 to 19.

Davis worked with a group of 5 year olds, and she the most difficult part was learning to communicate.

“They couldn’t understand a word I said. It’s difficult to show love to someone who’s not loved without using words,” she said.

Although each group was given a translator to translate daily lessons, Davis said she found communicating easiest through tickling and playing games.

She also washed their feet, sometimes using her thumbnail to peel off what looked like gum and layers of dirt stuck to their skin.

Although Davis said the kids seemed a bit confused at first, she said she could tell they understood the gesture.

“They were really quiet the whole time. After, even more then before, they wanted to be close to me,” she said. “It felt so gratifying but it also broke my heart. It was the best experience ever.”

Only about half of the original 30 missionaries continued with Davis to South Africa, where the group met another group of about 10 missionaries. There, they went to refugee camps and started conversations with people by asking if they needed help.

In between sweeping and washing clothes and dishes, they talked.

Most of the refugees she met were from Zimbabwe, Mozambique and Botswana, and most moved to South Africa because it has more available jobs.

One woman Davis met said she became a Christian after the death of her father and said “everything has been perfect since then.”

“But everything hasn’t been perfect,” Davis said. “Her brother, mother and husband have also died, and she left her two children in Zimbabwe to move to South Africa to care for them.”

Davis will graduate from Cornerstone Christian in December. She hopes to spend the spring semester working as a nanny in Italy, the summer interning with Every Orphan’s Hope and the next year going to school, she said.

“I want to get a teaching degree so that I can be a humanitarian teacher even in countries that don’t allow missionaries,” she said.

“Yes, (in Africa) they don’t have as much as us, but they have so much more faith and hope,” she said.

“Although, yes, in a way we’re more privileged than them–but definitely not better than them–it doesn’t mean you should feel guilty. It does man you should use your resources to help people who don’t have as much as you.”