Mike Richardson, a trapper with Wild Works of Alabama, said the traps he’s set out have resulted in two caught coyotes. The two coyotes were “definitely” sick and were euthanized at the scene, he said.

Richardson said the goal is not to rid the area of coyotes, but to catch sick coyotes, which are typically desperate for food and more likely to go after pets. 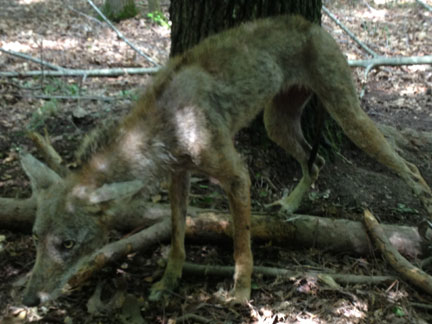 This is one of the two coyotes that have been trapped in the Inverness area. (Contributed photo)

“Right now, they’re trying to feed themselves along with their pups, and the pups are old enough to eat meat,” Richardson said.

He said he’s not sure what was wrong with the coyotes, but it appeared to be a mange-like disease. Mange is a skin disease caused by mites, which causes hair to fall out and causes lesions. The coyotes could not be tested for specific diseases because it’s illegal to transport a live coyote.

Richardson said 14 traps are currently out in the Inverness area. Some traps had to be removed because of incidents with other animals, including dogs. The traps are designed not to hurt or injure caught animals, and the dogs caught were fine, he said.

While Richardson considers the operation a success thus far, he said the rain in the area lately hasn’t helped, as the rain affects the traps.

Bobby Boyd, a member of the Inverness Master Homeowners Association Board, said the coyote problem isn’t limited to Inverness.

“We’re not any different from any other neighborhood out there,” he said.

A private landowner in the area has also caught and killed two coyotes, Boyd said.

Boyd said the coyotes usually target small dogs and cats, and tend to be out between 8 p.m.-4 a.m., although they have been seen during the day.

“When you go out at night, people have actually seen them,” he said. “They’ve started coming out in the daytime.”

Boyd said the traps are set up in wooded areas, where coyotes are likely to live. Signs are up to warn people of the traps.

Boyd said Inverness residents should keep their pets inside at night, and should not have outside bird feeders. Residents also should not leave food outside for deer, as that can attract coyotes as well.

Cornerstone Christian senior Laurel Davis traveled to Zambia and South Africa for a mission trip this summer, where she taught... read more