Cars by the Creek draws dozens of cars, spectators 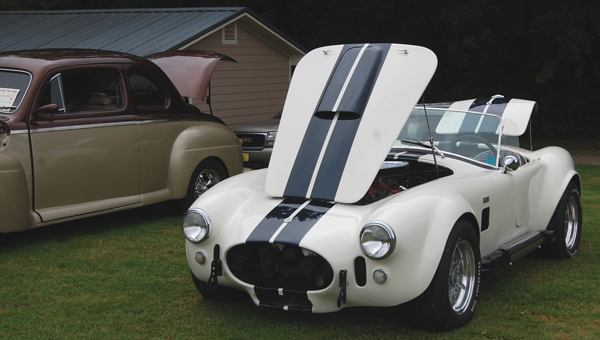 About 70 custom cars were shown in Montevallo’s Orr Park Saturday, Aug. 17 as part of of the annual Cars by the Creek car show. (Reporter Photo/Stephanie Brumfield)

MONTEVALLO – Dozens of people flocked to Orr Park Aug. 17 for the 12th annual Cars by the Creek car show, which had more than 70 cars on display. The event also boasted cotton candy, vintage license plates, free face painting, and more.

“It’s a really wonderful turnout,” said show coordinator Steve Gilbert. “The weather is nice, and there are lots of folks and a lot of great cars.”

Joe and Tressee Koloski of Calera came to the show with their two sons, Ethan and Cody, for the first time this year.

“We love it,” Joe Koloski said. “We’re car people. We didn’t have time to stay the whole time this year, but we’ll probably show next year.”

Johnny and Judy Hamilton of Thorsby, however, have been coming to Cars by the Creek for years.

This year, they showed a 1955 Chevrolet that they’ve had for four years.

Steve Stevenson of Columbiana has also shown cars for years, though this is his first time showing at Cars by the Creek.

Stevenson showed an army green, military-issued 1944 Willys Jeep, though as far as he knows, it never left the states during World War II, he said.

A member of the Military Vehicles Preservation Association, Stevenson has 23 cars that he shows at car shows and veterans’ events regularly.

“There’s too much nice chrome stuff,” Stevenson said. “They need something green.”

Lightning kick off season with win