Lightning kick off season with win 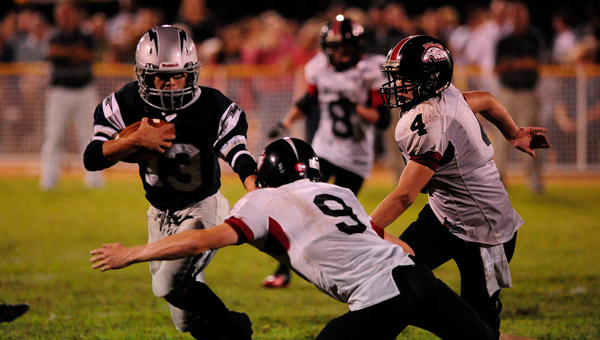 The game’s atmosphere took a celebratory nature, as it marked the first full season the Lightning will play at the new Evangel Sports Complex.

After Ballard opened the game with a three-and-out, Evangel’s first play from scrimmage was a 32-yard run by Nate Scott. The Lightning scored just four plays later when Scott took it in to make it 6-0. Evangel attempted to kick the extra point, but a bad snap led to a scoop and throw, as Scott hit Josh Letson for two points.

Ballard punted again following the kickoff, but managed to pick off an errant Lightning pass a play later. They were unable to move the ball, and punted for a third straight time.

The Lightning then put together a five-play drive that was capped off by a Mason Murphy touchdown run. Dru Bell tacked on the extra point to make it 15-0 in favor of Evangel with 1:31 left in the first quarter.

The Lightning defense continued to shut down the Eagles, forcing another punt. It took Evangel seven plays to score, as Caleb Hoge crossed the goalline for the touchdown. After Bell added the extra point to extend the lead to 22-0, with 8:26 left in the second quarter.

Ballard started to put a drive together, but was turned away once again, this time when Clay O’Neal intercepted an Alex Strong pass.

Evangel took just six plays to score, going up 28-0 after a missed extra point with 1:25 left in the half.

The second half proved to be more of the same for both squads, as Evangel scored on the fifth play of the drive with a rushing touchdown by Scott.

Ballard was able to get on the scoreboard late in the third, as a botched snap on an Evangel punt led to a safety, making the score 35-2 in favor of the Lightning.

The following drive, the Eagles lost a fumble deep in their own territory, which led to another Murphy rushing touchdown. The extra point was no good, and Evangel held a 41-2 lead with 2:34 left in the third.

Evangel tacked on another touchdown with 8:42 left in the game on a Murphy run, making it 48-2, Evangel.

Ballard was able to score a touchdown, recovered an onside kick and scored again, but it was too little too late, as Evangel took home the win.

Head coach Del Clayton said he felt the Lightning’s depth was key in the victory.

“We wanted to play fast,” he said. “We’ve been conditioning a lot. We wanted to establish the run, and that’s what we really concentrated on in the first half.”

Evangel will stay at home Aug. 23 taking on Tabernacle Christian at 7 p.m.