Chelsea group ministers on streets of our nation’s capital 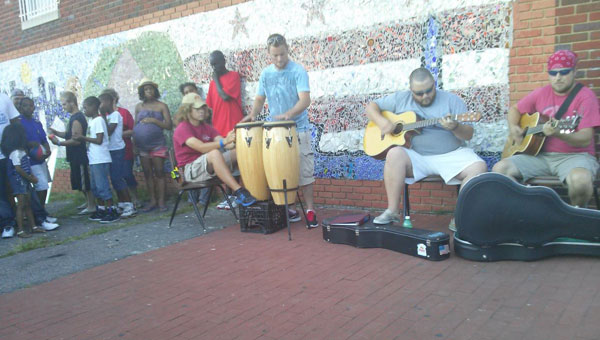 Members of The Red Catylist band, from The Connection in Chelsea, play for a church street service two miles from our nation’s capitol. (contributed)

Members of The Connection/Chelsea Community Church teamed up last week for community service here at home and in our nation’s capital.

While one group joined people from the community cleaning up around the schools as part of “School Cleanup Day,” another group was in Washington D.C. on an “Extreme Church Make-over” project.

The D.C. group did remodeling on an old 1960s building, which was once a hardware store, but will now become a church building in a slum district two miles from the Capitol.

The building was donated by a lady who had been holding Bible study on the sidewalk for twenty-plus years, Joni Matherene, children’s pastor at The Connection told me.

In the portion of the old building to be used for worship, they lowered the ceiling, rearranged and painted walls, laid carpet and tile, and built a stage, welcome center and café area, Matherene said.

They redid a room for children’s ministry with bright walls and things to attract the kids.

After hearing about the Chelsea church’s booming congregation and witnessing their services on the internet they had invited them to come and demonstrate their methods for church growth.

Then, on Friday night, the Chelsea group’s last night there, they held a big block party with music, food, face painting and other activities for the kids. More than a thousand people came that night, Matherene said.

“It was really a sad neighborhood,” she said. “There was a lot of drug dealing and prostitution. It wasn’t a safe place for us to be, but the Lord took care of us. And none of our people had a problem about going into it.”

One man, told her she said, that “this is the first time anything positive has ever happened in the this community.”

Tired, but excited, the group shared about their experiences in Sunday services at The Connection.