Shop burns down on Old Highway 25 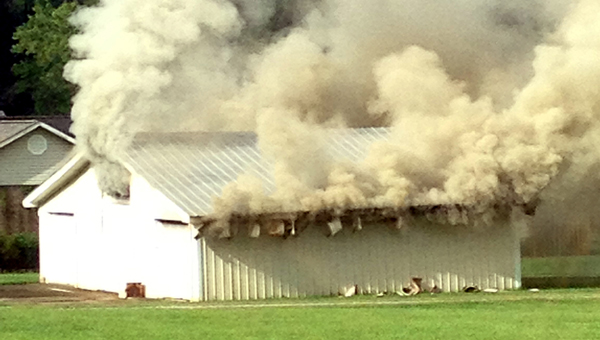 A shop located at 324 Old Highway 25 in Columbiana burned down Aug. 19. (Contributed)

COLUMBIANA – A shop building containing tools and equipment burned down in Columbiana Aug. 19, with the Columbiana Fire Department declaring the building a “total loss.”

The Columbiana Fire Department responded to a call Aug. 19 regarding a shop building on fire on Old Highway 25 in Columbiana.

Columbiana Fire Chief Johnny Howard said the call came in about 8:51 a.m., and the building on fire was a shop building at a residence located at 324 Old Highway 25 just west of the Shelbiana Veterinarian Clinic.

The building on fire contained several woodworking tools, a boat and some lawn-care equipment, which were destroyed in the fire.

“It was pretty much a total loss,” Howard said.

Due to the time of day and size of the structure, Howard said the Wilsonville Fire Department responded to the scene as well.

Working together, Howard said, “We got it under control pretty quickly.”

The cause of the fire is still unknown, though Howard said an investigator with the resident’s insurance company would be sent out this afternoon.

There were no injuries in the fire.