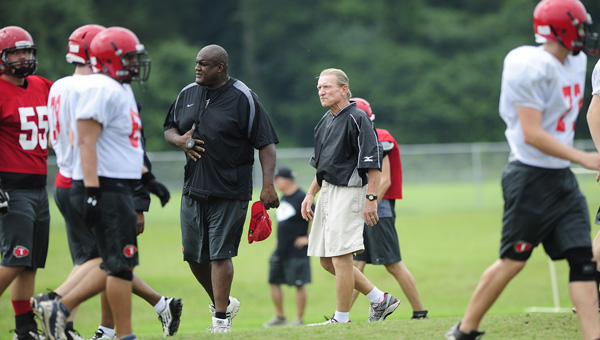 When the Thompson Warriors take to the field against Pell City, it won’t count in the records books, but according to coach Michael Montgomery, the game might be one of the most important all season.

“We always talk to our kids about potential tests and improving,” he said. “(The game) is an opportunity to find out how you’ve grown from spring.”

The Warriors face the Panthers in a jamboree game Aug. 23, and Montgomery said he wants to see how the team has grown as a unit since their spring game. In that game, Thompson fell to Calera 35-28.

Thompson will take a young team to face a Pell City squad that went to the second round of the playoffs in 2012.

Montgomery said the road trip will help provide needed experience for the group.

“Experience will take care of itself,” he said. “In order to be great players, (they) have to know how to win games on the road. It gives us an opportunity to learn how to travel. I’m very big on taking out the element of surprise.”

One of the concerns of any team is staying as injury-free as possible, but with the Warriors as youthful as they are, game experience before the season is at a premium, Montgomery said.

“We talk to them about protection on the field,” he said. “You can’t be lazy, (you have to) keep your feet moving. Succesful players play with (their) hips low.”

The game will kick off at 7 p.m. at Pete Rich-Alumni Stadium, located at 1300 Cogswell Ave., in Pell City.

Warriors ready to kick off season

Members of the Thompson High School football team perfect their plays during practice at the school on Aug. 14. The... read more