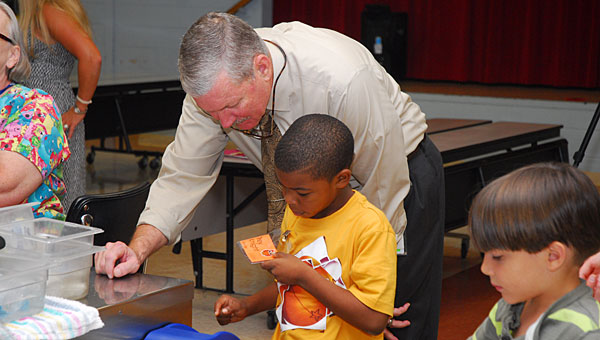 The kindergartners in the Valley Elementary School lunchroom on Aug. 21 displayed widely varying degrees of confidence as they approached the cash register to punch in their student numbers.

Some quickly made it clear they did not need Pelham Mayor Gary Waters’ help to enter their numbers, while others simply held up the cards hanging from their necks and waited for Waters to hit the keypad.

“I like doing this a lot. It’s the third day of school, so most of the kids have their lunch numbers memorized already,” Waters said. “Compared to some of the stuff we’ve done in the city, this is easy.”

Waters and several other Pelham officials continued a longstanding Pelham tradition on the first week of school, as they took time from their days to help VES kindergarteners navigate the school’s lunch process.

On Monday, City Councilman Ron Scott and Council President Rick Hayes helped during the first day of school, followed by members of the Pelham Fire Department on Tuesday. Pelham Public Library employees also are scheduled to help out in the coming days.

“It was a wonderful day at Valley Elementary. It was pleasing to meet the new principal (Linda Campanotta),” Scott said during an Aug. 19 council meeting. “Some of the kids were delighted, some were bewildered and some were distressed.”

“It’s just a good opportunity for us to help out and give back,” Hayes said. “They were sweet kids. I think I tied five pairs of shoes.”

Campanotta said the city leaders’ assistance helped the kindergarteners during what can be a stressful process for first-time students.

“This is really good for the kids. It’s wonderful,” Campanotta said on Aug. 21 after all the kids were through the lunch line.

Waters admitted his job was easier than the shift Hayes and Scott worked on the first day of school.

“Ron is retired, and his wife woke him up on Monday morning and said ‘You’re really going to earn your pay today,’” Waters said with a laugh.

By STEPHANIE BRUMFIELD / Staff Writer MONTEVALLO – Construction began on the National Veterans Shrine at American Village about a... read more