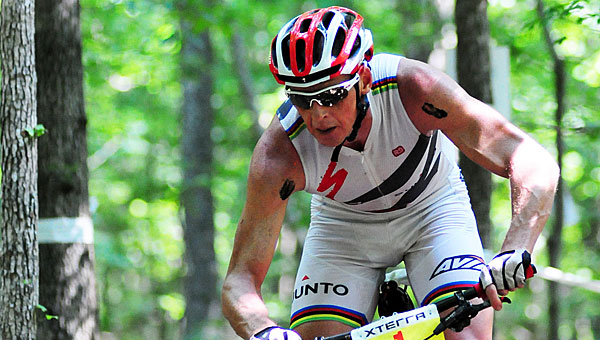 Oak Mountain State Park’s mountain biking trail system was named one of the best in the country in a recent USA Today list. (Reporter Photo/Jon Goering)

Pelham racked up its second national recognition in one week on Aug. 15 when USA Today named Oak Mountain State Park one of the “10 great places to take on mountain bike trails.”

Oak Mountain’s mountain biking trail system was one of the only destinations in the southeastern United States to be included on the list, which also included Death Valley, Calif., and Monongahela National Forest in West Virginia.

“Alabama’s largest state park, south of Birmingham, gives cyclists plenty of room to crank up the fun — and adrenaline,” read Oak Mountain State Park’s entry on the list. “A network of trails laces the preserve’s ridges and valleys.”

OMSP contains dozens of miles of mountain biking and hiking trails snaking throughout the nearly 10,000-acre park in Pelham, and its trail system is one of 52 named to the International Mountain Bike Association’s “Epic” list.

“Another accolade for a great park with a great bike trail,” read a post on the OMSP Facebook page. “Thanks to BUMP (Birmingham Urban Mountain Peddlers) for their hard work maintaining the trails.”