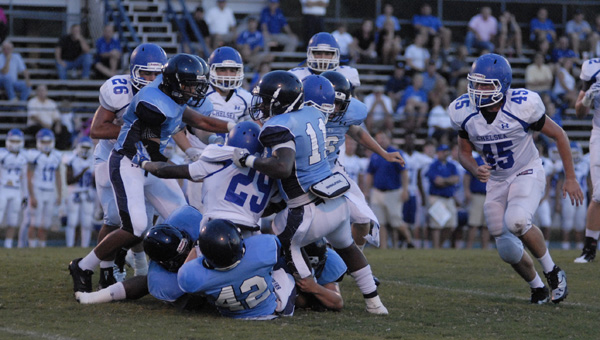 Chelsea running back Austin Washington (29) is tackled by a host of Calera defenders in a preseason matchup Aug. 22. (Reporter Photo/Drew Granthum)

In what was essentially a dress rehearsal for the regular season, the Calera Eagles upstaged the Chelsea Hornets, 17-6, in a jamboree matchup Aug. 22.

The game featured a format put in place to ensure the starters for both teams got a great deal of playing time while allowing younger players to get experience as well.

The first half saw both schools’ varsity squads play each other, with the junior varsities playing each other in the third quarter and freshman teams playing in the fourth.

After Chelsea differed to the second half to open the game, both traded punts once, then Shakeith Tyes broke a long run on the first play from scrimmage to put the Eagles up 7-0 after a Stephen Ellison extra point.

Chelsea started its next drive on its own 24. After a staggering 17 plays took the Hornets 76 yards, Austin Washington scored on a three-yard run. The Taylor Martindale extra point was no good, making the score 7-6 in favor of Calera.

On the second play of the next drive, Ronnie Clark hit Jordan Bishop for a 50-yard pass up the sideline which took the Eagles to the Chelsea 16 yard line. After the drive stalled, Ellison nailed a 33-yard field goal to put the Eagles up, 10-6 at the end of the first quarter.

Chelsea began the second quarter with a three and out. Calera then appeared to be putting a drive together until the Chelsea defense recovered a Clark fumble.

Starting at their own 42, the Hornets methodically drove down the field. The Hornets made it all the way to the Calera 14, where the drive stalled out when they were unable to convert a fourth down attempt.

Following the turnover, Calera marched the ball down the field, taking nine plays to put another score on the board, as Clark and Bishop connected again for a 31-yard touchdown pass. Ellison tacked on the extra point to make it 17-6 Calera, with 59 left in the first half.

The Hornets then began to put a drive together, but ran out of time as the half ended.

Chelsea head coach Chris Elmore said he felt good about the Hornets’ performance, despite coming up short on the scoreboard.

The defense only had three bad plays, but those were plays that led to Calera scoring, Elmore said.  He also said he was impressed with the play of his offense and younger players.

“We’re excited about that (freshman) group,” he said. “We have seven to eight 10th graders that are going to play this year.”

Clark finished the game 2-of-4 for 92 yards passing and a touchdown. He also ran for 48 yards. Tyes racked up 86 yards on seven carries with a touchdown, and Bishop had 92 yards receiving with the touchdown for Calera. The Eagles will open its season on the road at Holt Aug. 30.

For the Hornets, Austin Washington led the team in rushing with 78 yards on four attempts and a touchdown. Hagin finished 7-of-11 with 59 yards passing. Chelsea will host John Carroll Aug. 30.

Jordan Semien contributed to this report.