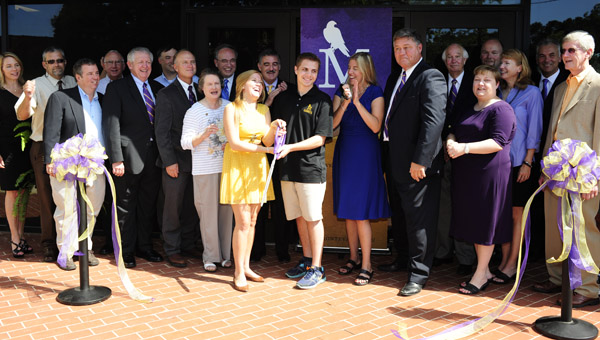 The ribbon is cut on the new Montevallo on Main during a ceremony Aug. 23. (Reporter Photo/Jon Goering)

MONTEVALLO – The cobblestone bricks in front of the old Alabama Power building in Montevallo were covered with community members the morning of Aug. 23 as dozens gathered for the ribbon cutting ceremony for the University of Montevallo’s newest addition, Montevallo on Main.

The bricks–which start in the streets of downtown Montevallo and continue into the entryway of the new university facility–are fitting, as they seem to represent a blurring of lines that Montevallo Mayor Hollie Cost says she has been eager to see.

“It’s a beautiful day,” Cost said. “This is the day when lines are blurred between the university and the city…and that’s as it should be.”

The building’s construction was completed in a period of about eight months, according to County Manager Alex Dudchock, who says he “gives the glory to God.”

“A successful and growing University of Montevallo equates to economic success in our county,” Dudchock said.

UM President Jon Stewart said it’s almost impossible to thank everyone who needs to be thanked at these ceremonies, but he said he would try his best in a rapid-fire fashion. Stewart thanked the Montevallo Development Cooperative District, the Montevallo City Council, the Shelby County Commission, the University of Montevallo Board of Trustees and many other individuals for helping make the project happen.

Former Montevallo Mayor Ben McCrory, who started discussions with county employees about three and a half years ago, said he’s excited to see the vision unfold.

“It’s going beyond my expectations,” McCrory said. “It was a vision when it started, and it’s been followed through. I’m very proud of our current administration.”

American Village founder and CEO Tom Walker also said the day is special. As a University of Montevallo alumnus and first-generation college student, Walker said he thinks of himself first and foremost as an alum.

“Buildings are important, but what takes place in the classroom is the magic of Montevallo,” Walker said. “My having gone through the gates of Montevallo changed my life. It’s a stronger bond than the cement that holds this building together.”

Montevallo on Main is scheduled to hold 55 classes this fall as well as most office spaces for the department of behavioral and social sciences. About 4,000 students are expected to make trips to the facility weekly.