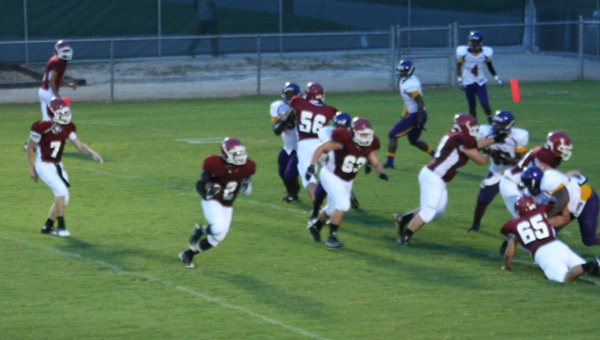 Shelby County’s Marterious McGregor (2) takes a hand off from Ty Proctor around the end in a jamboree game Aug. 22. (Contributed)

By MARK WINDHAM / FOR THE REPORTER

Shelby County hosted Bibb County in a jamboree on Thursday night and came away with a 28-21 victory.

The Wildcats and Choctaws traded punts and fumbles early, but Shelby County linebacker Brandon McGill set up the Wildcats’ first scoring drive as he recovered a bad snap by Bibb County.

Shelby County drove 63 yards in 14 plays to open up the scoring for the night. Senior quarterback Ty Proctor completed three passes for 26 yards and ran four times for 20 yards on the drive. Senior Marterius McGregor put the Wildcats on the board late in the first quarter running in from three yards out for the touchdown. Aldo Jones added the point after to give the Wildcats a 7-0 lead.

McGill recovered another bad snap by Bibb County, but the Wildcats could not take advantage as they lost yardage on two bad snaps and an incomplete pass.

Bibb County scored on its next two possessions, first on a 16-yard TD run and then with a 57-yard quarterback draw to take a 13-7 lead at the half.

The second half was a matchup of younger players and the Shelby County running attack took over.  Quarterback Joseph Schauer led the Wildcats 70 yards on 6 plays to retake the lead.  Schauer ran the ball four times for 54 yards on the drive and junior Jamacus Riggins scored from nine yards out.  Jones added the PAT to give Shelby County a 14-13 lead.

The Wildcat defense stood strong on Bibb County’s next possession as they forced a fumble at the goal line to keep the Choctaws out of the end zone.

Schauer went right back to work as he got two big runs of 38 and 45 yards, the second run going for a touchdown.  Jones’ third PAT gave the Wildcats a 21-13 lead.

Shelby County got one last touchdown from Keyvontae Mayfield and Jones added his final extra point to give the Wildcats a 28-21 win.

“The first half we played our varsity guys and we started a lot of guys for the first time.  The jitters were there a little bit and you could tell,” Smith said.  “We had four or five dropped balls on passes and two snaps over the quarterback’s head.  We had some missed assignments and had two linemen out so we were not able to run the ball like we wanted to.  Our JV guys ran the ball really well and the ninth grade guys did a good job (t0) hold on at the end.”

The Wildcats will travel to Thompson to open up the 2013 football season on Aug. 30.

Chelsea running back Austin Washington (29) is tackled by a host of Calera defenders in a preseason matchup Aug. 22.... read more