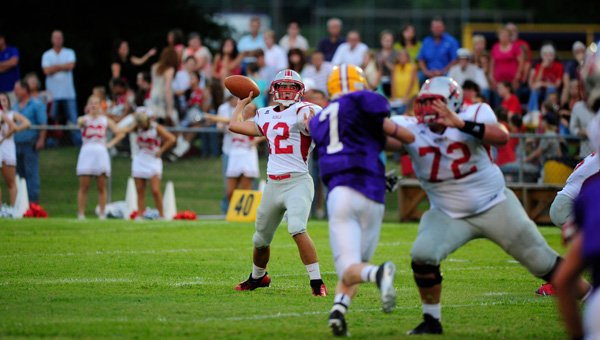 COLUMBIANA — It took just 52 seconds after kickoff for the Coosa Valley Rebels to set the tone for their rivalry matchup with the Cornerstone Chargers. A touchdown off a 58-yard run by Niko Teofilo on the second play of the game established command for the Rebels, as they took defeated their cross-county rival 50-14 Aug. 23 in Columbiana.

Following the score, Cornerstone moved the ball, putting an eight-play drive together that ended when an Ian Briggs pass was intercepted by Trey Dubose at the Cornerstone 39.

The following play Zach Spratlin hooked up with Dubose for 32 yards, taking the Rebels to the CCS 8 yard line. Two plays later Teofilo took it in again, and following Sharp’s extra point, the score was 14-0 in favor of Coosa Valley with 7:02 left in the first quarter.

Following a Cornerstone punt, Coosa took to the air, as Spratlin hit Colton Pate for seven yards. Following a CVA block in the back penalty, Cornerstone was called for pass interference which gave the Rebels a 15-yard gain and a first down. Spratlin then hit Dubose again for 24 yards, which set up a 7-yard touchdown run by Grant Lovelady, to make it 21-0 after the Sharp extra point.

Cornerstone was able to extend the drive on a CVA roughing the kicker penalty. Things then took a turn for the worse for Cornerstone, as running back Michael Brevard left the game with an ankle injury the next play. The Chargers were unable to convert to keep the drive going, and punted.

Coosa Valley scored again on a 16-yard run by Lovelady, and after Teofilo scooped a bad snap and ran it in for two points, the score was 29-0, CVA.

Cornerstone put together a drive on the next series, making it all the way to the Coosa Valley 19 before losing a fumble.

Bradley Carroll then ripped off an 88-yard touchdown run which made it 36-0 following the point after, with 2:48 left in the second quarter.

Cornerstone then followed the long play with a drive that saw Briggs hit Dustin Wooley for a 25-yard touchdown pass. The two-point conversion was good, and the Chargers trailed 36-8 heading into the half.

The second half saw more of the same,  as Coosa Valley recovered a fumble on the opening drive and Spratlin hit Colton Pate for a 25-yard touchdown pass to pull ahead, 43-8.

Cornerstone answered with a 12-play drive that ended when Trevor Howell scored on an 8-yard run. The two-point conversion was no good, and the scored was 43-14 with 33 seconds left in the third quarter.

The final score of the game came when Landon Harmon took a keeper into the end zone, and after the Zack Sharp extra point to stretch the lead to 36.

Cornerstone drove all the way down to the CVA 12 before time ran out as the Chargers threw a pass down at the goal line.

Coosa Valley coach Arlton Hudson said he felt the strength on the offensive line was key in the victory.

We’re a lot stronger than we were last year,” he said. “I think that showed tonight. We controlled the line of scrimmage. That was the difference in the game.”

CCS coach Tim Smith said he was proud of the effort of his young team.

“We’re young,” he said. “I knew we were going to have some growing pains, and we are. We’re going to come back Monday and we’re going to keep working. They didn’t quit, they kept playing as hard as they could. Coosa Valley’s got a good football team, (and) Coach Hudson’s done a great job with them.”

By DREW GRANTHUM / Sports Writer The fine-tuning for opening weekend didn’t go quite as hoped for the Thompson Warriors,... read more