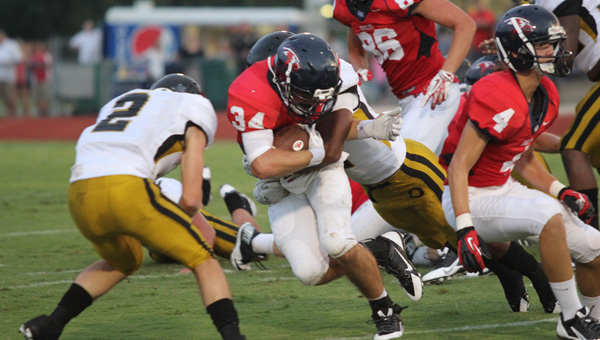 By DREW DENNIS / FOR THE REPORTER

The Eagles opened up the game with a drive that was given extra life through a pass interference call. It negated an Oxford interception that was returned to the OMHS four yard line. The Eagles took advantage of Oxford’s mistake and drove down 50 yards, which set up a 42 yard field goal by Blake Miller, making it 3-0 in favor of the Eagles.

The scoring would slow down in the second quarter as each team traded long drives only to finish with turnover on downs.  Oak Mountain took over after a turnover on the OMHS 33-yard line after a turnover on downs by Oxford with 4:53 left in the half.  Oak Mountain would then put together a 10-play drive for 67 yards capped off by a quarterback sneak at the goalline by Warren Shader set up by Reid Golson’s 25-yard catch.  D.J. Garver’s PAT with 1:11 left in the half put the score at 14-10 in favor of Oxford.

As the second and third string saw some reps in the second half, smooth execution of plays came at premium.  Oxford fumbled on its first play from scrimmage in the second half, which was recovered by the Eagles on Oxford’s 25 yard line.  Oak Mountain could not take advantage of the field position, turning the ball over on downs with 7:58 left in the third.

After a punt from Oxford, Oak Mountain fumbled again, giving the Yellow Jackets excellent field position.  Oak Mountain then came up with a much needed goal line stand to keep Oxford out of the end zone.

Neither team was able to find the end zone again, as Oxford escaped Oak Mountain with a 14-10 victory.

Jags take down Homewood in jamboree