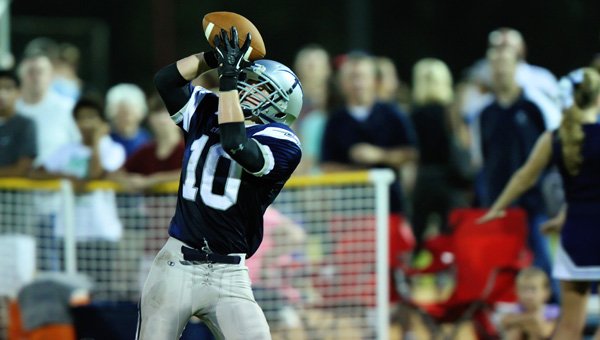 Evangel receiver Mason Murphy hauls in a pass in a 61-0 win over Tabernacle Aug. 23. (Contributed/Cari Dean)

By MARK WINDHAM / FOR THE REPORTER

ALABASTER — The Evangel Christian Lightning ended a three-game losing streak to Tabernacle with a dominating 61-0 victory at Home Aug. 23.

Evangel’s focus showed as Nate Scott scored on a 63 yard run on the second play of the game.  The two-point attempt was no good as the Lightning took an early 6-0 lead.

After a three-and-out by Tabernacle, Evangel scored when Clay O’Neal punched it in from 9 yards out and Dru Bell added the PAT for a 13-0 lead. Defense and special teams scored next as the defense held Tabernacle and scored a safety on a bad snap to give Evangel a 15-0 lead.

The Lightning took two plays to go 26 yards for their next score.  Andrew Thompson rushed for 19 yards and then Pete Sullivan scored from 7 yards out. Bell’s PAT gave Evangel a 22-0 advantage.

Another defensive stand by the Lightning led to a Nate Scott 14-yard touchdown run. The extra point was missed, but Evangel ended the first quarter with a commanding 28-0 lead.

Evangel only needed two plays for their next score.  Nate Scott found Mason Murphy wide open down the left sideline for a 38-yard touchdown reception and a 34-0 lead. ECS carried a 47-0 lead into the half.

The Lightning scored twice in the second half to make the final score 61-0.

Evangel limited Tabernacle to 36 yards of total offense on 38 plays.

Offensively, Nate Scott ran five times for 85 yards and two touchdowns, completing one pass for 38 yards and a touchdown. Defensively, Tyler Byrd finished the night with four tackles, three for loss, and a sack.

Evangel improved to 2-0 on the season and is off next week.

-Karl Kemp contributed to this story.