Jags take down Homewood in jamboree 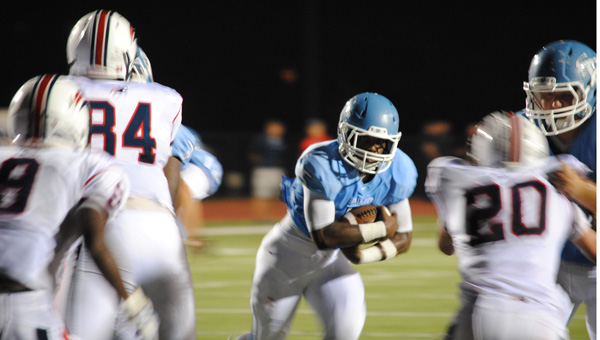 By CLAYTON HURDLE / FOR THE REPORTER

The Jaguars, paced on offense by senior running back Otis Harris, senior quarterback Mickey Forrest and junior quarterback Mason Duke, responded to an early deficit by scoring an offensive touchdown in each of the first three quarters.

“We’re trying to establish a running game,” Raney said. “We’ve got some backs that can really run it, and the kids bought into it. I’m really proud of them right now.”

After Homewood started off the scoring with 2:43 to play in the first, Harris turned a screen pass from Forrest into an 85-yard touchdown reception at the 1:22 mark.

A Homewood three-and-out with 38 seconds to play in the quarter set up a blocked punt, which junior linebacker E.J. Marino returned for a lead-changing touchdown.

In the waning moments of the first half Harris struck again, this time from the ground. A five-yard score with 28 seconds until halftime gave the Jags a 21-7 lead.

Starting out the second half behind center for Spain Park, Duke led the Jags 80 yards down the field in just over four minutes to begin the third quarter.

A one-yard run by sophomore running back Wade Streeter capped the drive and gave the Jaguars a three-touchdown lead early in the third.

Streeter was one of a number of tenth graders who saw significant playing time for Spain Park in the jamboree, but arguably none stepped up more than linebacker Perry Young.

“The coaches had a scheme for us, and told us to execute it and have fun,” Young said. “I just tried to make good plays for my teammates, so that we could start off a good season.”

Young recorded seven tackles, including one and a half sacks, during the first half and made other defensive contributions throughout his two quarters on the field.

“Perry Young can be an outstanding player,” Raney said. “He’s a great kid and a great football player. It looked like he was making every play on the field. He was all over the place for us tonight.”
The Jaguars, coming off a 2012 state quarterfinal run, hope and expect the jamboree win to be a taste of things to come.

“It looks great going forward,” Young said. “We still need work, everybody needs some work. We have to execute in practice and study film. Hopefully good things will come from it.”
The Jags will host their official season opener against Austin High Aug. 30 and is set to kick off at 7 p.m.