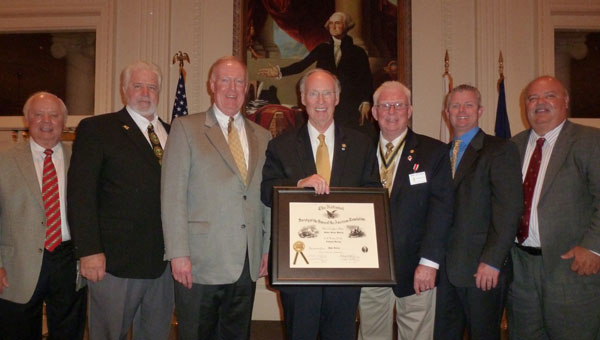 Robert Julian Bentley, 53rd governor of the State of Alabama, was the honored guest and keynote speaker at the 10th anniversary celebration dinner of the Cahaba-Coosa Chapter of the Alabama Society Sons of the American Revolution (ASSAR). The dinner honoring Shelby County’s only ASSAR chapter was held at Liberty Hall, American Village in Montevallo. SAR is an educational, historic and patriotic organization for men over the age of 18 who are lineal descendants of an ancestor who supported the War for American Independence.

Gov. Bentley was also awarded the prestigious SAR Silver Good Citizenship Medal and Certificate by Bobby Joe Seales, charter member and founding president of Cahaba-Coosa Chapter and current ASSAR senior vice president. This medal is presented to a person of prominence in the area of government, military service, religion, education, business, the professions and other appropriate fields of endeavor and may only be presented once in a lifetime.

“I love Shelby County,” said Gov. Bentley. “I was raised in Columbiana and consider Shelby County my home. Shelby County is the geographical center of Alabama; Alabama is called the Heart of Dixie; and Shelby County is the heart of the heart. I love the people of Alabama and am honored to be your governor. Every day as I lead this state, I pray for God to give me His wisdom as I deal with complex issues and make decisions. My daily goal is to be a servant leader to represent Alabama with honesty and integrity. This honor is very special to me for we are a country who should never forget those who sacrificed their lives for our freedom.”