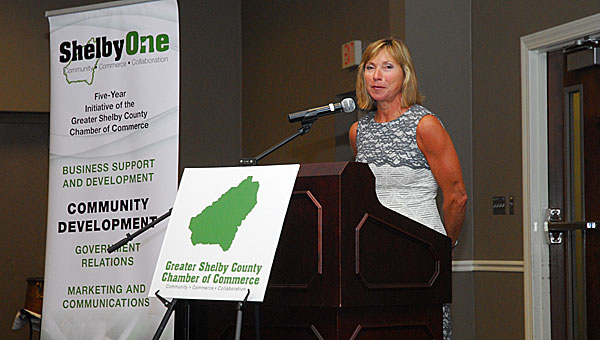 Artistic and cultural events can mean big money for Shelby County’s economy, but the county is battling a shortage of arts venue space, according to Shelby County Arts Council Executive Director Terri Sullivan.

Sullivan shared the impact the arts have on the county’s economy during an Aug. 28 Greater Shelby County Chamber of Commerce lunch at the Pelham Civic Complex and Ice Arena.

“I hope I have given you a new perspective on the arts today,” Sullivan said. “We hope you don’t view us as a charity with our hands out, but as an engine to drive economic growth and prosperity.”

Sullivan said Shelby County’s major arts and cultural events pump significant amounts of revenue into the county’s economy. The total economic impact of Alabaster’s CityFest is about $1.7 million per year, while the Helena Buck Creek Festival brings an about $400,000 annual economic impact.

The Buck Creek Festival also has donated about $170,000 over the years to local charities.

The Shelby County Arts Council likely will bring a total economic impact of about $2.4 million per year once its new performing arts and education center is built in Columbiana, Sullivan said.

Though arts-related events and entities already bring big bucks to the county’s economy, the impact could be larger if Shelby County had more arts venues, Sullivan said.

Outside the Birmingham-Jefferson Convention Complex, Jefferson County has 31 arts venues containing 14,000 seats. Shelby County has seven venues – five of which are in Montevallo – containing 2,029 seats.

“If we want to use arts as a business draw, we are going to have to find or build more space,” Sullivan said. “Many people who move to Shelby County come from Birmingham. When they come here, they look for some cultural amenities as they had in Birmingham.”

Sullivan also highlighted the Erwin brothers, who recently shot the majority of their movie “Mom’s Night Out” in Pelham, and praised Pelham High School graduates Joseph DeLage and Troy Wagner, whose web series “Marble Hornets” is being made into a movie.

FROM STAFF REPORTS U.S. 280 eastbound has been reopened at Klein Road, near the Talladega County line. The road was... read more