NORTH SHELBY – A suspect arrested for burglary, theft and other charges was caught in the act by Sheriff’s deputies in North Shelby County Aug. 23.

Vinston Taylor Hanson, 31, of Birmingham, was arrested at the 7000 block of Meadowlark Lane in Birmingham while breaking into a business, according to Capt. Ken Burchfield with the Shelby County Sheriff’s Office. 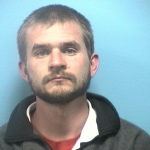 After the arrest, deputies searched Hanson’s car and found several stolen checks, debit cards and gift cards, as well as a computer with others’ personal information on it, including names, dates of birth, social security numbers and addresses, Burchfield said.

Hanson is currently being held in the Shelby County Jail on charges of third degree theft, third degree burglary, receiving stolen property, possession of a forged instrument, trafficking of stolen identities and unlawful possession/receipt of a controlled substance. He is being held on bonds totaling $142,000.