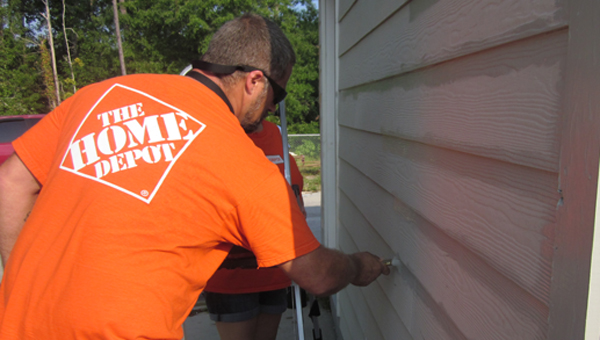 COLUMBIANA – Pelham Home Depot employees put the finishing touches on a new storage facility at the Shelby Humane Society Aug. 29, painting the facility that will provide much-needed space for the Humane Society’s overflowing amount of supplies.

As part of Team Depot, Home Depot’s associate-led volunteer program, Adrianne Chesnutt, Kelli Haas and James Davis volunteered their time on their day off to paint the new facility, which was partially funded by a $1,500 grant from the Home Depot Foundation.

Before the storage facility was built, Shelby Humane Society’s Executive Director Sara Shirley said supplies were in “every crack and crevice” of the building, often crowding offices and other spaces. With the new storage facility, she said they would be able to be more organized.

“We are so thankful,” Shirley said.

The grant also helped fund another structure Humane Society employees say is invaluable – a large, covered structure at the back of the main building that provides shade for animals when they need to be outside.

In addition to painting, Chesnutt also assisted the Humane Society in facilitating the grant process, helping them get a materials list together and apply for the grant.

“I really wish we could help more, but there’s so many things that need funding,” Chesnutt said.

Once the grant was approved, Shelby County maintenance technician Ricky Allen said the projects took about one month to complete.

“It’s really good for the animals and the works as well,” Allen said.