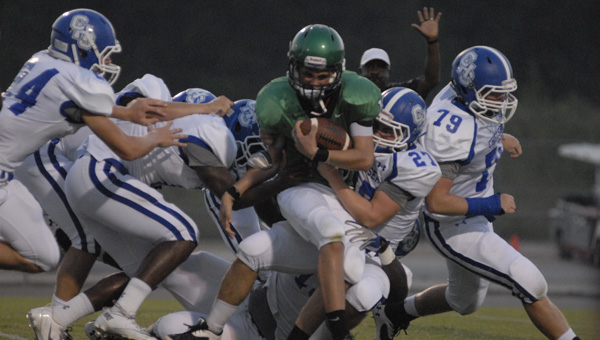 The Chris Elmore era of Chelsea High School football got started with a bang Aug. 29 as the Hornets dominated the John Carroll Cavaliers, 62-14.

The scoring happened early and often, as Chelsea turned a John Carroll three-and-out into a seven play, 62-yard drive, resulting in an Aki Coles touchdown. Taylor Martindale tacked on the extra point to make it 7-0 Chelsea with 7:29 left in the first quarter.

After Darrell Foster recovered a John Carroll fumble on the next drive, Chelsea scored again when Trent Hagin hit Josh Pugh for a 26-yard touchdown pass on fourth down to pull ahead 14-0 after Martindale hit the extra point.

Chelsea logged another score with 14 seconds left in the first when Hagin hit Martindale on a 36-yard pass, with Martindale also adding the extra point, putting the Hornets up 21-0.

After the Cavaliers ended a drive on a muffed punt, Chelsea needed a single play to go 22 yards for an Austin Washington rushing touchdown.

Following another Cavalier punt, a 47-yard Hagin run set up a one-yard Coles touchdown run, putting the Hornets up 35-0 with 5:54 left in the second quarter.

The Cavaliers punted on their next drive, giving Chelsea the ball on their own 30. It took a 7-play drive for the Hornets to get on the board again, this time when A.J. Jones broke a three-yard run into the end zone. With the Martindale extra point, the score became 42-0 with 18 seconds left in the half.

After taking the kickoff, Chelsea turned three plays into six points as Jones took a 73-yard run into the end zone. Martindale tacked on another extra point to make the score 49-0 with 10:35 left in the third.

The Cavaliers finally got on the scoreboard when a four-play drive following a fumble turned into a Jelani Bender 32-yard touchdown run. The point after made it 49-7 with 5:29 left in the third.

On the next drive, Chelsea answered back when Daniel Barnette scored on a 35-yard run. The point after made the scored 56-7 late in the third.

The Cavaliers scored again early in the fourth to make it 56-14, but Chelsea responded with a Zalon Reynolds touchdown with 4:09 left. Austin Bailey’s extra point attempt was no good, and the final score of the game was 62-14 in favor of Chelsea.

“I’m proud of these kids and these coaches,” Elmore said. “They’ve worked so hard since I’ve gotten here. It’s a first step, and we know we still have a long way to go. We’ve got to get a lot better before we play Thompson next week.”

The Hornets logged 541 rushing yards in the game. Jones led the team with 101 yards on the ground. Hagin finished with 62 passing yards and two touchdowns. Martindale’s 36 yards led all receivers.

The Hornets open region play Sept. 6 when they host Thompson.

By DREW GRANTHUM / Sports Writer ALABASTER — For the Kingwood Lions, the Aug. 23 season opener against Jackson Academy was... read more