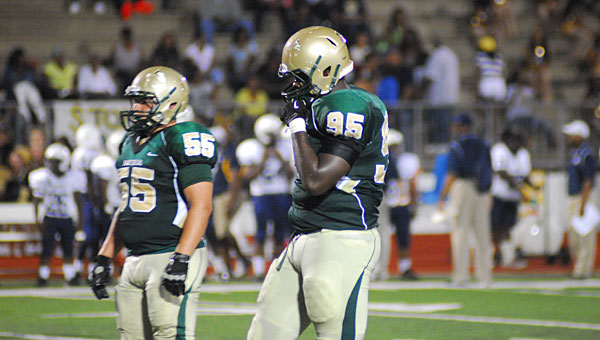 Pelham High School fans will have another reason to enjoy Southeastern Conference football in the fall of 2014, as PHS senior defensive lineman Braxton Hoyett announced his commitment to Mississippi State University on Aug. 30.

After the Panthers’ 28-0 victory over visiting Paul Bryant High School, Hoyett pulled out a white Mississippi State baseball hat and put it on his head, drawing cheers and applause from his teammates and the about 50 PHS students gathered on the field around him.

“I appreciate the love and support from all my teammates. Y’all have shown me love from day one,” Hoyett said during a team huddle after the game. “I’m officially a Bulldog.”

Hoyett chose Mississippi State over another scholarship offer from the University of Miami.

David Hardenbergh (27) and a host of other Hornets sack John Carroll quarterback Riley Mara in a 62-14 victory Aug.... read more