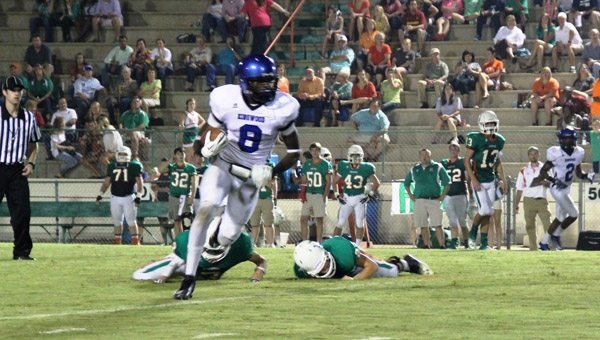 The scoring came early and often in Kingwood’s road matchup with Hooper Academy Aug. 30. In a game where Kingwood had more than 500 yards of offense, explosive plays and key stops by the defense, the Lions came out on top 56-34.

The game, which lasted almost three-and-a-half hours, saw both squads openup by trading punts before Kingwood recovered a Hooper fumble on its own 43. The Lions opened up scoring when Carlos Stephens took a 15-yard touchdown run in. The point after was no good, and the Lions led, 6-0.

Hooper answered back with a one-yard touchdown run and made extra point to make it 7-6 in favor of the Colts.

Kingwood responded on the next drive when Gavin Sumrall hit Montez Haynes for a 72-yard pass for a touchdown. The two-point conversion made it 15-6 in favor of the Lions.

A 65-yard touchdown pass and missed extra point on the next drive left the Colts trailing, 14-13.

Kingwood followed with a 48-yard pass from Sumrall to C’Yontai Lewis to pull ahead 20-13, following a missed extra point, to end the first quarter.

It took until the 4;46 mark in the second quarter for the scoring to begin again when Sumrall scrambled for a six-yard score. The extra point was no good.

Hooper followed with a score, taking a two-point conversion to pull within five, 26-21.

Kingwood racked up another score with 30 seconds left in the half, as Sumrall hit Haynes for a 50-yard touchdown pass. The extra point was good, and the Lions led 33-21.

Kingwood opened up scoring in the second half, as Sumrall hit Lewis on a 2-yard score to pull ahead 39-21 after the missed extra point.

Hooper responded on the next play from scrimmage, as Nic Taylor scored on an 80-yard run. The two-point try was no good, and the Colts trailed 39-27.

Kingwood scored again when Tyler Byrd scored a safety when he caused a Hooper fumble in their own end zone. The score put the Lions up by two, extending their lead to 14.

Stephens scored next for the Lions, taking a 5-yard run in for six. The extra point was good, giving Kingwood the 49-27 lead with 1:28 left in the third quarter.

The fourth quarter saw each team score once more. With five minutes left in the game, Micah Wallace broke loose for a 73-yard touchdown run. The extra point was good, and Kingwood held a 56-27 lead late in the fourth quarter.

Hooper answered back, scoring once more with 3:47 left in the fourth quarter. The extra point was good, and the Colts pulled within 22.

Kingwood got the ball back with three minutes left and never relinquished it, running out the clock and sealing a 56-34 victory.

“My hat’s off to Hooper,” head coach Steve Birmingham said. “We knew they would be good and come out fighting. I’m proud of our guys for playing four quarters and not letting up.”

Sumrall finished with 313 yards and four touchdowns. Hayes had three catches for 134 yards and two scores.

The Lions will travel to Bessemer Academy Sept. 5.

Luke Granthum contributed to this report.

Jaguars pounce on Austin in opener