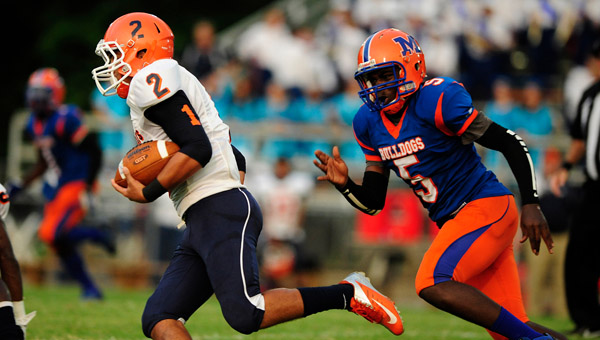 BY MARK WINDHAM / For the Reporter

Montevallo’s season got off to a rough start as visiting Fultondale would jump out to an early 21-0 first quarter lead and never look back as they cruised to a 41-0 victory.

Fultondale wasted little time getting on the scoreboard as they took the opening kickoff and scored on a 5-play, 50-yard drive.

Montevallo mustered very little offense during the first quarter as they went three-and-out on all four of their first quarter possessions.

Montevallo’s defense tightened up in the second quarter as the Bulldogs held Fultondale scoreless while the offense finally got some momentum going on their final drive of the first half.

Montevallo took possession on their own 38 yard line and put together a 9-play, 53-yard drive that took them down to the Wildcats’ 9 yard line.  Daymon Smith came up with a key 10-yard run on fourth and three and added a 25-yard run on the next play to get the Bulldogs down to the 20 yard line.  After a 5-yard loss, Michael McKenzie ran for 14 yards to the 11 yard line.  Montevallo could not take advantage, however, as Zac Oden’s pass in the end zone was intercepted with three seconds remaining in the half.

The second half would be much of the same for the Bulldogs as they were not able to get deep into Wildcat territory.

Fultondale added two touchdowns in the third quarter and another in the fourth quarter to pull away with a 41-0 victory over the Bulldogs.

“We are not where we want to be,” Montevallo head coach Andrew Zow said.  “I thought we prepared better than what we played.  They jumped on us early in the game and we couldn’t bounce back.  We just have to keep fighting because we are a young team.”

Montevallo would manage only 173 yards on the night.  The Bulldogs travel to B.B. Comer Sept. 6 to open region play.

Rodney Groce (31) and a host of Yellow Jackets take down West Blocton’s Jaylon Gaines in a 26-20 win Aug.... read more