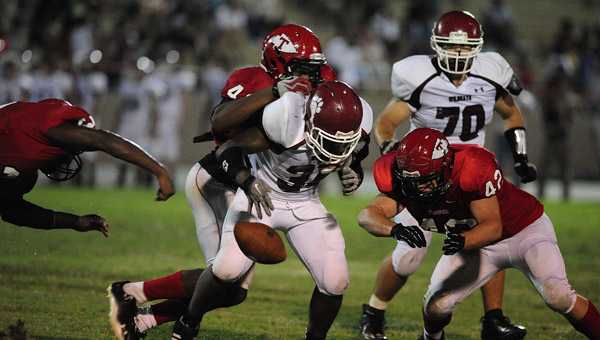 Thompson linebacker Keelan Allman dives for a fumble in an Aug. 30 matchup with Shelby County High. The Warriors shut out the Wildcats, 37-0, to start the season 1-0. (Reporter Photo/Jon Goering)

The Thompson Warriors and Shelby County Wildcats opened up their 2013 seasons by facing each other in a matchup of old-time rivals. When all was said and done, the Warriors took down the Wildcats 37-0.

Opened the game with Dee Tolbert breaking out for a 34 yard run on third and ten moving the ball into Shelby County territory.  However, the Wildcats forced the Warriors to punt after just three more plays.

The Wildcats gained a first down, but then the Warriors forced a fumble after 24-yard pass reception and Kyle Sample recovered for Thompson.

Starting in Wildcat territory, the Warriors moved the ball 48 yards in two plays.  A 13-yard run by quarterback Zach Brammer and then a 35-yard pass from Brammer to Eric Reeves and the Warriors were on the board.  A David Buckelew extra point made it 7-0 Thompson at the 6:50 mark in the first quarter.

After a Buckelew punt pinned Shelby County deep in their own territory, Emmanuel Taite scored a safety to give the Warriors a 9-0 lead.

Thompson scored again when Brammer connected with Reeves in the end zone. After Buckelew’s extra point it was 16-0.

The last score of the half was a 28-yard pass from Brammer to Xavier Johnson. The score at the half was 23-0.

Thompson would score two more times in the second half while the defense kept the Wildcats grounded. With 1:19 left in the third, Tolbert ran 49 yards for the score, making it 30-0 Thompson.

The final score came on a busted play that ended with Brammer scrambling out of the pocket and crossing back across the field before finding a wide open Frank Mwaikajumba who dashed to the end zone for a 43-yard score.

“Our defense has had opportunities in the past to keep teams scoreless, and couldn’t close the deal, but tonight they got the big goose egg,” stated Thompson Coach Mike Montgomery.  “We thank God for the opportunities we have been given and for the win tonight.  We were able to seal the deal tonight but still need to continue to improve.”

The Warriors travel to Chelsea Sept. 3 to face the Hornets.

By DREW GRANTHUM / Sports Writer The fine-tuning for opening weekend didn’t go quite as hoped for the Thompson Warriors,... read more